Thank you to all who came out in support of safer roads for every road user.

All the photos I took can be viewed here. 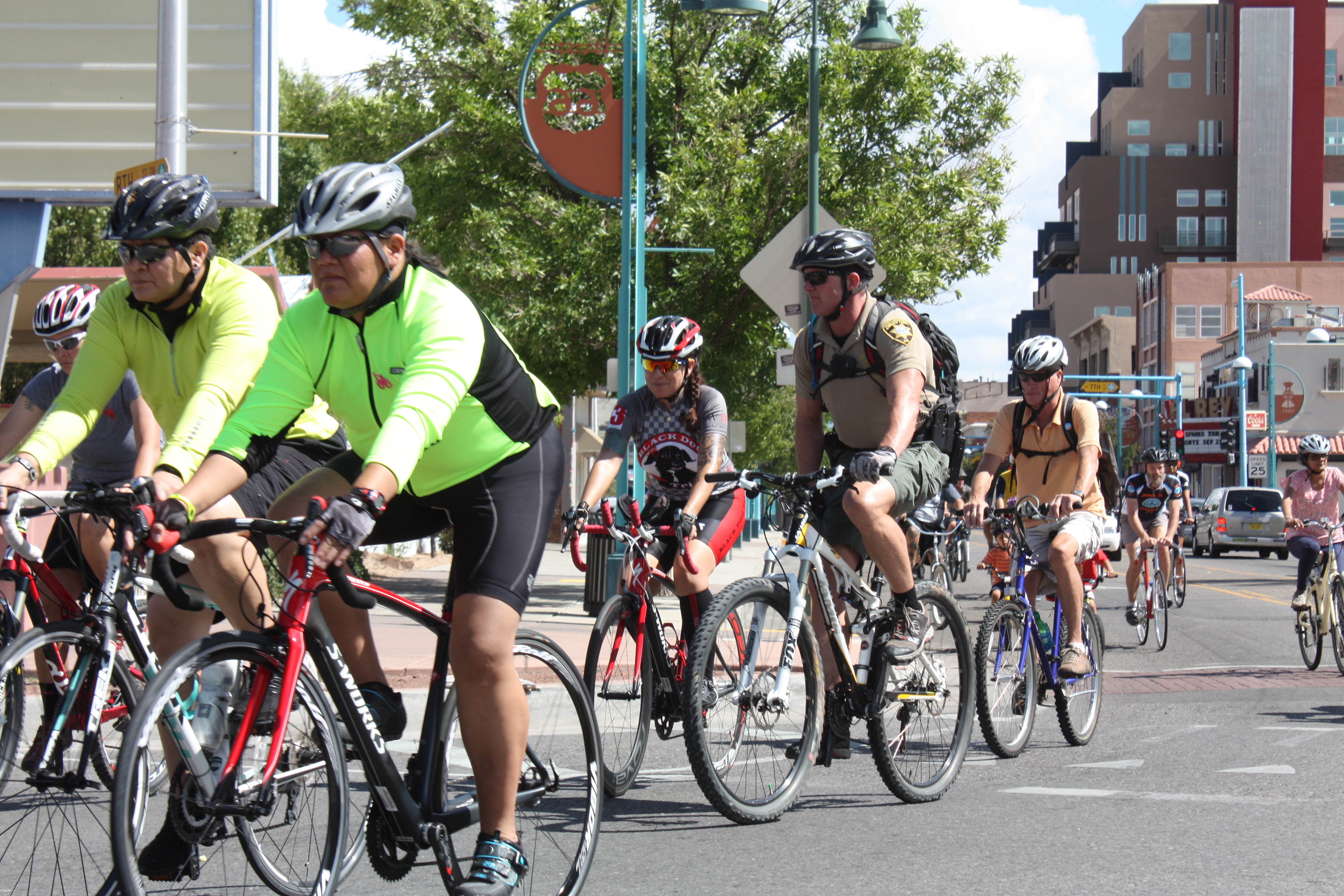 Special thanks to the Bernalillo County Sheriff’s

Who:  YOU!  This four-mile bicycle parade is something any cyclist can do.

What: This bicycle ride travels down Route 66 with full police escort at a speed slow enough for cyclists of all ages and abilities!!!

Where: Start is from University and Coal SE, CNM campus parking by Smith Brasher Hall.

Why:  The purpose of this bicycle parade is to bring greater awareness of cyclists on the road and increased traffic safety for all road users.

How:  Sign-up online or in person.  Preregistration at http://www.newmexicosportsonline.com/Cycling/6th-Annual-Can-You-See-Us-NOW-2014/789

The event is free, but donations are welcome to help us cover expenses.  With a donation of $5.00 or more you can complete your registration online and have no day-of paperwork.  (Electronic signatures, as per our insurance company’s requirements, are only accepted when accompanied by a financial transaction.)

If you are unable to donate at this time, it is still helpful to complete the online registration.  You will then need to stop by and complete your release before the event at the start area, University and Coal SE, from 11:00 am to 12:30 pm..

Riders will need to wear a helmet.

Examples abound from cities and states across the U.S. on efforts aimed at improving Traffic Safety in general, with special focus on bicycle and pedestrian safety (see links below).

Here in Albuquerque though, not so much.

That is why the 6th Annual “Can You See Us NOW?”  Bicycle Parade down Route 66 is focused on Traffic Safety.

Duke City Wheelmen invites you to join us September 28, 2014 at 1:00pm to show your support for increased Traffic Safety.

Safety Efforts elsewhere in the U.S.

Again and again in these efforts the idea that “we all just want to get where we are going safely” crops up.  And with good reason.  Who doesn’t want to be safe?

Despite the fact that NM or ABQ Government isn’t taking a lead in promoting Traffic Safety, we can take measures ourselves.  Here are four simple ways each one of us can contribute:

1)    Focus On Driving.  Put away distractions before you start the engine or pedal off.

2)    Practice Active Visual Scanning.  To see all road users in plenty of time, avoid a fixed focus only on what is directly ahead.

3)    Communicate with other road users.  Signal, wave and say thank you.  Help them understand what you will do next.

4)    Be a Predictable Driver.  You will create fewer surprises and increase your safety and the safety of others. Knowing and following traffic laws is the place to start for this one.

In the world of promoting Traffic Safety, there are the 3 E’s.

The “Three E’s” are based on a simple idea that many are already familiar with; different people learn by different means.  Want to reach enough drivers to improve the overall Traffic Safety?  Use as many means as possible.

NMDOT Department of Traffic Safety has unveiled an anti-texting and driving campaign aimed to educate drivers on the new Statewide ban on texting and driving.  They have also been responsible for some motorcycle safety awareness building, but no efforts that I know of to build public consciousness about bicycle or pedestrian safety.

Bike lanes, multi-use paths and bike routes are all engineering efforts.  Some in the City are good, but as any street cyclists knows all too well, many bike lanes end at the place you need them most, at intersections!  NMDOT gives us edge-to-edge shoulder pavement in some places like Tramway Blvd and parts of NM333/Route 66 in the Tijeras Canyon region.   Sadly though, edge-to-edge paving and other infrastructure improvements are NOT the rule in New Mexico.

Except for the laudable education efforts of Chuck Malagodie and others with City of Albuquerque Parks and Recreation Department and the Esperanza Community Bicycle Shop, we have seen very little from the City of Albuquerque to promote Traffic Safety.

In fact, the City of Albuquerque has taken traffic law enforcement off the table for the Albuquerque Police Department.

“The number one goal for the Albuquerque Police Department is crime prevention and we really want them working on that, traffic issues, we’d rather work with,” said Michael Riordan, acting director of the city’s Municipal Development Department. “There’s 3 E’s: engineering, education and enforcement, and we’re trying to do as much engineering as we can to limit what they have to do. APD has 19 officers devoted to traffic.”

Although Traffic Safety does receive some attention from City and State officials, it isn’t enough.  Right NOW, traffic safety needs YOU!

You, your friends and family, multiplied by the thousands….

Think about the statement that would make…

Do you want our City policy makers to take traffic and cyclist safety more seriously?  Come SHOW your concern.

Without YOU, this success of this event won’t be what it should be. 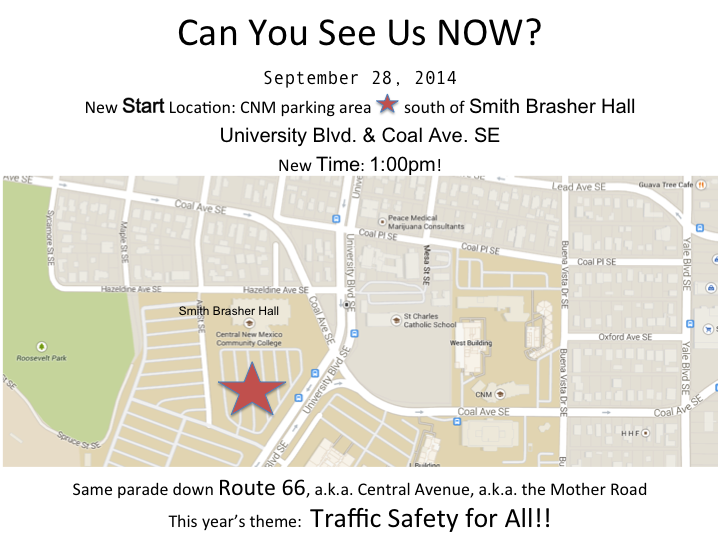