September 7, 2007 was a very nice fall day in the Albuquerque area. James Quinn and his wife Ashley were riding their bicycles from Albuquerque east towards Tijeras on old Route 66. The couple had recently moved to Albuquerque for James, 28, to start classes at UNM’s School of Law. They were on the shoulder, well out of the traffic lane, with another group of cyclists just behind them.

Angela Browning, 19, driving a 2001 Mitsubishi passenger car was headed in the same direction when she struck the couple, killing James and injuring Ashley. Apparently Browning saw the group behind the Quinns, moving left to pass them, but in a statement to police she indicated she had not seen James and Ashley. In her written statement to Bernalillo County Sheriff’s officers Browning said “I was going about 60 mph and swerved off the road. I didn’t even see him.”

Browning was found guilty of careless driving and failing to maintain the lane, paying $310 dollars in fines and $213 in other court costs. 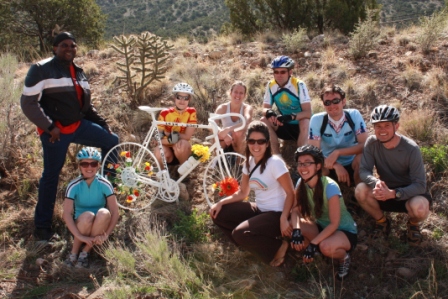