At least three cyclists were pulled over while riding on the Tramway shoulder on March 25 and were warned (no citation) by the APD Officer that what they were doing was illegal.  He told them to “look it up” when he was asked what ordinance he was enforcing.

“He said they were just giving out warnings now, and about to start handing out tickets.”  This seems very reminiscent of what the cycling community went through a few years back….

The ordinance was signed into law on April 5, 2011 by Mayor Berry.

If you care to find the ordinance, go to www.cabq.gov/council

This is minor to being shot by APD, but it is all part of the same problem.  There is new information in the news that reveals problems with the training candidates receive.  In addition to issues with the training, APD has lost so many senior officers, there is almost no one there for the long period of on-the-job training it takes for rookies to become good officers. With the Justice Department investigation ongoing & moral at rock bottom, recruiting quality candidates to the job is also a huge problem.   Also, you can be sure that no officers are receiving the specialized training it takes to investigate a crash involving a motor vehicle and a bicycle or pedestrian.

All this in turn leads to a breakdown of police effectiveness across the board, from traffic safety to burglaries or other policing issues. These police shootings are the most outrageous, but everywhere you look APD is compromised.  All of us are affected; this is not an issue just for the “homeless.”

For cyclists and pedestrians, the way that the Traffic Division is compromised leads to a lack of due diligence when investigating motor vehicle/bicycle or pedestrian crashes.  This in turn will make it virtually impossible for anyone to be charged when there are severe crashes that result in great bodily harm or death.   In addition, unlike a 1997/98 APD effort to actually enforce traffic laws today we have an “engineering” approach to bringing traffic under control.

This is a big issue.  Most people are not aware of the extent of the problem within the Albuquerque Police Department.  One way this all impacts cyclists and pedestrians is that the Traffic Division comprises the only people who have any chance at all to tell the stories of victims of severe crashes.  Without training and being able to accurately document crash scene evidence, no accurate picture can be painted of what happened and victims have no voice.

I’m not anti-cop.  What I want from APD is for the officers to be able to do (so much) more than pull the trigger.

Report from the GARTC meeting:

The members of the Greater Albuquerque Recreational Trails Committee are not any happier about the I-25/Paseo project’s bike/ped facilities.  Or the “50 Mile Activity Loop” a.k.a. “50 Mile Bike Loop” (I have my own name for this particular plan, but it doesn’t belong here.)

Neither of these projects will improve the safety of cyclists or pedestrians.  They don’t support the goals or objectives of the City of Albuquerque On-Street Bicycle Plan.  They won’t make it any easier for people to choose to ride a bicycle instead of drive their vehicle.  There will be no impact on the livability of Albuquerque.  Both projects had/have potential, but with the current mentality of the decision makers in Albuquerque City Government, the potential is going to be lost.

Check back for more details.

There are 3 important topics for discussion at the GARTC meeting Tuesday.
All these issues will have long term impact on the
SAFETY and QUALITY
of cycling in ALBUQUERQUE.

Public Comment
To make a public comment at this meeting you must request at least 24 hours prior to scheduled meeting, please email James at jlewis@cabq.gov or call at 768-5325
(Public input is limited to 2 Minutes)

Multi-modal traffic:  Some cities get it.  ABQ doesn’t. 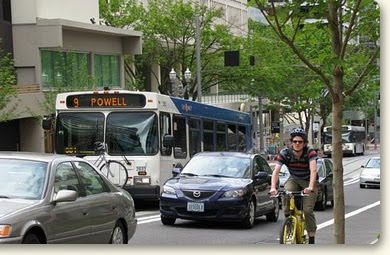 TORONTO gets it:  “… we calculated that in 2006 alone the economic burden of congestion amounted to $3.3 billion and $2.7 billion in lost opportunities for economic expansion. These economic, social and environmental costs will more than double over the next quarter-century if not addressed.”

People in NORTH CARLIONA get it:  “We need to start focusing on fostering a sustainable compact community with multi-modal transportation systems instead of focusing and catering to an environment built soley around using an automobile to go everywhere.”

Why: Because ABQ residents want our city streets that facilitate all forms of transportation.Albuquerque Journal.  Monday, March 10, 2014.  Page A4.

ATALE OF TWO WAYS TO TRAVEL: One got a ringing endorsement from officials last week, the other is fighting to get their attention tonight.

Unlike ABQ Ride, the bus system that is already a success on Central (that corridor accounts for 42 percent of all city riders), BRT would allow riders to buy tickets before they get on the bus, board quickly because the platforms are level with the floor of the vehicle, and travel in dedicated lanes with a driver who can communicate with traffic signals to reduce delays.

It’s like an e-ticket to your destination, whether that’s Old Town, Downtown, the University of New Mexico or Nob Hill.

According to the BRT Policy Center, BRT “service is frequent enough that passengers do not need a schedule” and “can operate at speeds nearly twice as fast as conventional buses and roughly equivalent to light rail, getting people quickly to their destination.”

Cleveland has BRT on its Euclid Avenue, a system Mayor Richard Berry has referred to often as a model. That city says its system runs passengers 24-7 down a 6.8-mile corridor to 58 stops including “the city’s cultural and educational institutions, medical and business centers, and all the mom and pop shops in between.”

The policy center says “BRT systems have capital and operating costs substantially lower than rail” and “can be developed incrementally, allowing systems to be installed over time as community needs and demands change.” And considering federal matching dollars could pick up a big chunk of the tab, a next-generation bus system seems to make more fiscal, transportation and economic development sense for Albuquerque taxpayers than the failed streetcar attempt of a prior administration.

A 2011 feasibility assessment would have Albuquerque’s BRT run on the Central median from 98th Street to Tramway Boulevard. The city says in a news release it plans to host public meetings over the next year “about BRT and the important part it can play in the vitality of our city’s future.”

CYCLISTS FLASH A YELLOW WARNING ON PASEO PLANS: Yet at the same time the city is working on alternatives to single-occupant motor vehicle traffic on Central, there’s a controversy coming to a head about ensuring cyclists and pedestrians have safe routes in the final Paseo del Norte/Interstate 25 rebuild.

Today, from 4:30 to 6:30 p.m. in Room 7096 of City Hall, it’s time to talk about what the state Department of Transportation has deemed “last design aspects.” Attendees are expected to include folks from the Greater Albuquerque Bicycle Advisory Committee, Duke City Wheelmen, Albuquerque’s Department of Municipal Development, as well as home office staff from Sens. Martin Heinrich and Tom Udall and Rep. Michelle Lujan Grisham.

It is important this missing segment of bike lanes be done in a smart manner — cyclists can already travel quickly and safely along Paseo from Coors to just west of Jefferson. There it gets challenging at best, with heavy truck traffic on El Pueblo, a busy Jefferson and — gulp — the interstate.

Cyclists will again present their concerns about the current proposal, which has changed from a bridge over the whole interchange to a route that Duke City Wheelmen President Jennifer Buntz describes as “a lot like running through a maze.”

And a dangerous one at that, with no barrier between the motorized vehicle frontage road and the bike path (should we order ghost bikes now and beat the rush?), cyclists expected to ride on sidewalks against traffic, with a guardrail on one side and a steep drop on the other (a pedestrian collision waiting to happen), an 8 percent grade on the bridge over the interstate (the steep pedestrian bridge over the river at Interstate 40 is just 5 percent), and no color or textural delineation of bike lanes from car lanes (just check out the vehicle tire marks in bike lanes around town to see why it’s needed).

Buntz’s point is not to bust the $93 million rebuild budget — she says the bike component “could be done much better within the financial constraints that are present” if the design-build team would allow a cycling perspective at the table.

“With the proximity of Railrunner/bus transit and the high number of employers in the I-25/Paseo area,” she explains, “there is a golden opportunity to support the last mile of a commuters journey with safe, direct and efficient bicycle and pedestrian facilities in this area.”

The city is busy gearing up the next generation of mass transit with an eye toward quite literally driving economic development. It would be great to see that kind of vision on Paseo as well.