Had a great weekend! Rode 204 miles over the 4 days. Now that is something to be thankful for 🙂 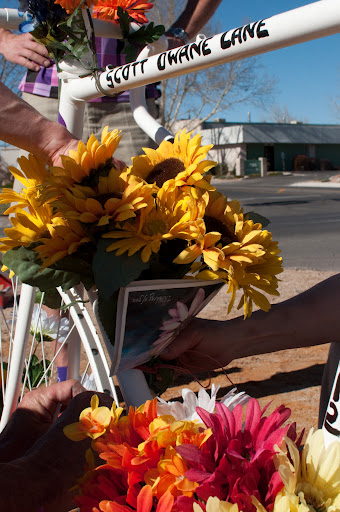 Dwane Lane was riding his bicycle home from work on January 10, 2012 when Carol Svinarich ran a red light, killing Lane. He is survived by his wife Sheryl Kearby and four children. Lane was a family man, Scout leader, business man and well respected community member.

After nearly a month of investigation, Svinarich was charged with the maximum charge under curent New Mexico law, which is the misdemeanor charge of careless driving. This charge can result in a penalty of up to $300 dollars in fines and/or 90 days probation or jail time.

Duke City Wheelmen Foundation was able to assist the Lane family by placing a ghost bike at the site of the crash on March 23, 2012.

Another man riding a bicycle was also hit in Albuquerque on January 13, 2012. This man, later identified as Michael Ryan, died a few days later from his injuries. Ryan was thought to be a homeless individual. Unlike Lane, Ryan was riding improperly, crossing Lomas on a red light when hit. All cyclists’ are well served by riding with traffic and following all traffic rules, just as we expect from any vehicle on the road.

Everyone is safer when we all follow the rules. 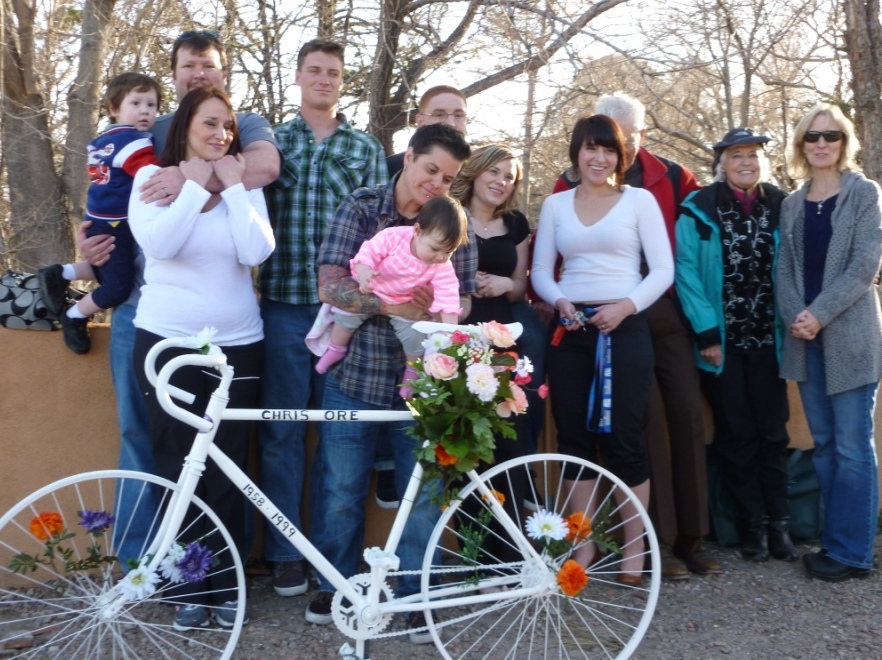 Although Chris Ore died in 1999, this ghost bike was placed for him in 2012.  Chris was killed crossing University Blvd. at Los Lomas by a driver who ran their red light.  His parent, wife and now grown childern came to dedicate this ghost bike .  Although Chris died 13 years ago, he is still loved and missed, with this memorial giving his family another way to express their feelings.

Out on his twice weekly lunchtime ride, Dan Montoya, 53, was nearing the crest of the climb up Tramway Blvd. east bound from his office at Honeywell. Bruce Wickensburg, 78, was driving his white Chevrolet passenger car westbound on Tramway on this same fine spring Thursday, May 12, 2011.

Based upon the crash investigation completed at the scene, road evidence, debris, as well as the oral interview it is this investigators findings that the driver of the motor vehicle, Mr. Bruce Wickensburg, failed to maintain his traffic lane he drove left of center and onto the shoulder of Tramway Blvd. crashing into the bicyclist (Daniel R. Montoya) which resulted in his fatal injuries. Therefore Mr. Wickensburg was found to be at fault for the crash which resulted in Mr. Montoya’s death.

The Office of the District Attorney for the Second Judicial District here in Bernalillo County has said that although the case does not fit the Homicide by Vehicle (DUI or Reckless) we will precede with Careless Driving charges against Bruce Wickensburg. 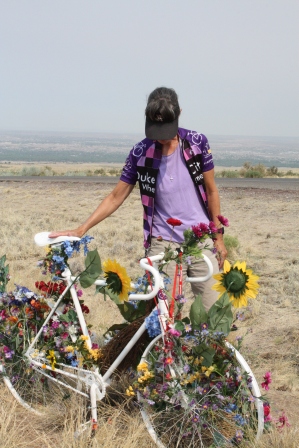 A set of “reckless driving” circumstances were documented sufficiently for the case against Miranda Pacheco, 25, in the death of cyclist David Anderson, 56, on March 22, 2010. Bernalillo County investigators were able to obtain statements from witnesses to Pacheco’s reckless driving prior to her swerving out-of-control, cutting across three lanes of traffic, traveling up the embankment, through a fence and crashing into Anderson on the Paseo del Norte multi-use path killing him instantly. Without this documentation of poor driving behavior before the crash she would NOT have been charged with “Homicide by Vehicle (reckless)”. The first trial began October 11, 2011, but resulted in a hung jury. The case will be retried starting October 1, 2012. 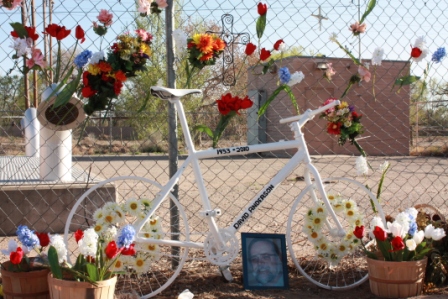 Roy Sekreta, 43, was headed home from work, commuting by bicycle as he did most days. One of the reasons he had come to Albuquerque was because it was possible to commute by bike most of the year. Northbound on the North Diversion Channel multi-use path he was attempting to cross Comanche Blvd on March 3, 2008. Nathaniel Martin, 25, traveling east bound on Comanche, hit Sekreta sending him flying through the air across the median into the westbound traffic lane and his bicycle all the way into the diversion channel. Sekreta was pronounced dead at the scene by an investigator from the Office of the Medical Examiner.

Meanwhile, Martin fled the scene. He returned about 30 minutes later. Martin told the investigating APD officer in a taped interview that “he made a lane change to the left lane so he could pass that vehicle in the right lane when all of a sudden a bicyclist came out of nowhere in front of him. Nathanial said that he estimated his speed to be about 50 M.P.H.” Comanche Blvd. has a posted speed limit of 40 mph in that area. 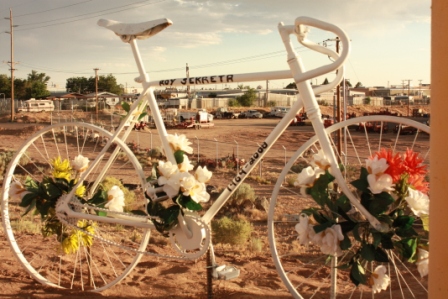