Heather Reu, 42, together with her husband Phil, parented four beautiful adopted children, ages three through seven. She was an active member of her church, supporter of many charitable endeavors and a ready volunteer worker for many causes. She was also a triathlete and frequently did her bicycle training near their house on Albuquerque’s west side. On June 23, 2009 she was out for just such a training ride, proceeding lawfully, northbound on Paseo del Volcan. A vehicle driven by Daniel Gomez-Rubio, 40, struck her from behind. Heather died at the scene.
Gomez-Rubio attempted to flee the scene, but witnesses stopped him from leaving and he was arrested. Bernalillo County Sheriff’s Sgt. Brian Lindley said, “The tire of the vehicle Gomez was driving briefly left the roadway moments before he struck Reu.

Gomez-Rubio was not penalized for the actions that led to the death of Heather Reu.

If he had not fled the scene, his penalties would probably not have included jail time. 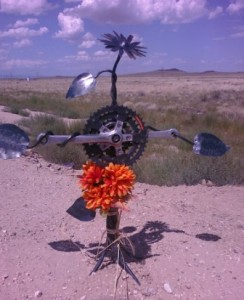