As one of the founders, and the President of, Duke City Wheelmen, I want to let you all know our policy on the placement of ghost bikes. We place ghost bikes for people killed while cycling. Our secular organization makes no judgement on who is “worthy” of a ghost bike.

We hope that you who support ghost bikes can understand and support the placement of ghost bikes without regard to race, creed, color, nationality, gender, circumstances of their death or any other characteristic.

If someone asks, we respond.

Whatever the circumstances of the individual’s death, the person was loved and is missed. We hope that the placement of a ghost bike helps the family and friends of the fallen cyclist heal. We also hope that the ghost bikes we place help all road users remember to be attentive, alert and responsible.

Ryan Matthews Hodder, 29, finished his overnight shift at a Circle K at Lomas and Broadway NE and headed south around 5 a.m. on the bike his fiancée had given him as a Christmas present.

“It was blue and black,” Chas Laila Tso said. “It was pretty pricey, but it was his pride and joy, so it was worth it.”

Hodder rode that bike everywhere, taking long treks from the couple’s home near Downtown Albuquerque to the trails along the Sandia foothills and back. It was a love not shared by Tso.

And Hodder, to her concern, did not do the bike helmet.

“He had some reason, something that happened to him when he was a kid – I’m not sure,” she said. “I’d say, ‘You better safeguard yourself,’ and he’d just talk about how many times he had been hit already.”

It was as if he thought he were invincible, immortal.

On that morning, though, Tso began to worry that he might be neither.

“We were texting through the night, and everything was fine,” said Tso, who also works a night shift caring for medically fragile patients. “It takes about 15, 20 minutes to make it home, so when 5:30 came around, I started to wonder.”

At 6, she called his cellphone. The call went straight to voice mail.

At 7:18, she made a final call, and then she got in her car and started heading up Broadway to the Circle K.

She didn’t have to go far.

At Martin Luther King and Broadway, she saw the flashing red lights, the yellow tape, the police and paramedics and the blue and black bicycle.

“I kept hoping it wasn’t him,” Tso said, her shaking voice cracking as the tears come. “But I knew.”

The crash occurred about 5:20 a.m., Albuquerque police said. A motorist had been driving east on MLK with a green light, hitting Hodder on his bike in the crosswalk.

Hodder, the spokesman said, had ridden against the “do not cross” signal. He died about two hours later, no longer invincible nor immortal.

That was Aug. 27. Today, his body remains bagged at the state Office of the Medical Investigator, as Tso and Hodder’s mother continue to struggle to raise enough money to have him cremated and in their care.

Rosie Hodder Clemons, Hodder’s mother, who lives in Grants Pass, Ore., said she hopes to have enough money – about $485 – by next month to get her son’s body cremated and released to her. It’s hard, she said, to cobble together the money because she has lupus and is on disability.

It was also hard, she said, to learn of her son’s death while scrolling through Facebook.

“It was posted, and I saw it there,” she said. “His friends were trying to contact anybody in his family.”

She had not seen Ryan in a year, but wrote him often and knew that his life was going well, which had not always been the case. New Mexico court records indicate that he had been arrested on an out-of-state felony charge in February but was soon released and the charge dismissed after that state declined to pursue extradition.

“He had some struggles, but he was good, stable,” Clemons said. “He had a good job, a good place. He had his girlfriend. He was taking care of her real well. He was just a good kid with a good heart. He didn’t deserve to die like that.”

It’s another reminder that no one is immortal, that bike helmets are crucial and the rules of the road matter.

“Signalized intersections are useful only if we obey the signals,” said Jennifer Buntz, president of the Duke City Wheelmen, which advocates for safe biking and sharing the road. “That goes for not running red lights and also not crossing in a crosswalk when you don’t have the right of way. Avoiding another senseless death is a great reward for simply obeying the signals.”

The number of cyclist deaths per capita for New Mexico was second only to that of Florida from 2010 to 2012, and 50 percent higher than the national rate, according to the state Department of Health. How many, one might wonder, were caused by a cyclist’s decision?

A ghost bike is planned to be erected at the site where Hodder was struck, a visual reminder of a life lost and a road rule not followed.

For Tso, Clemons and those who love and miss Hodder, how he died makes the pain even sharper. In some ways, though, that’s just how Hodder was – free-spirited, adventurous, artistic, outspoken, unencumbered by that which govern us mere mortals. He learned too late that he was mortal, too.

Tso and Clemons had never spoken to each other until after Hodder’s death, and though their brief relationship has been cordial it has also been spotty, with one woman or the other not able to contact the other at times. That has, in part, contributed to the delay in obtaining the body and laying it to rest.

But they agree on how much they loved Hodder. And they agree on the plan to raise enough funds to obtain his cremains, take them back to Oregon, to Mount Hood, a place Hodder loved to snowboard, where his ashes will be scattered. Only then will he be home.

DCW will accept donations via our PayPal account, or at to the ghost bike dedication.

You can read more from the Albuquerque Journal on traffic safety, or the lack thereof, HERE.

To all my fellow New Mexicans, please, we need to do better. 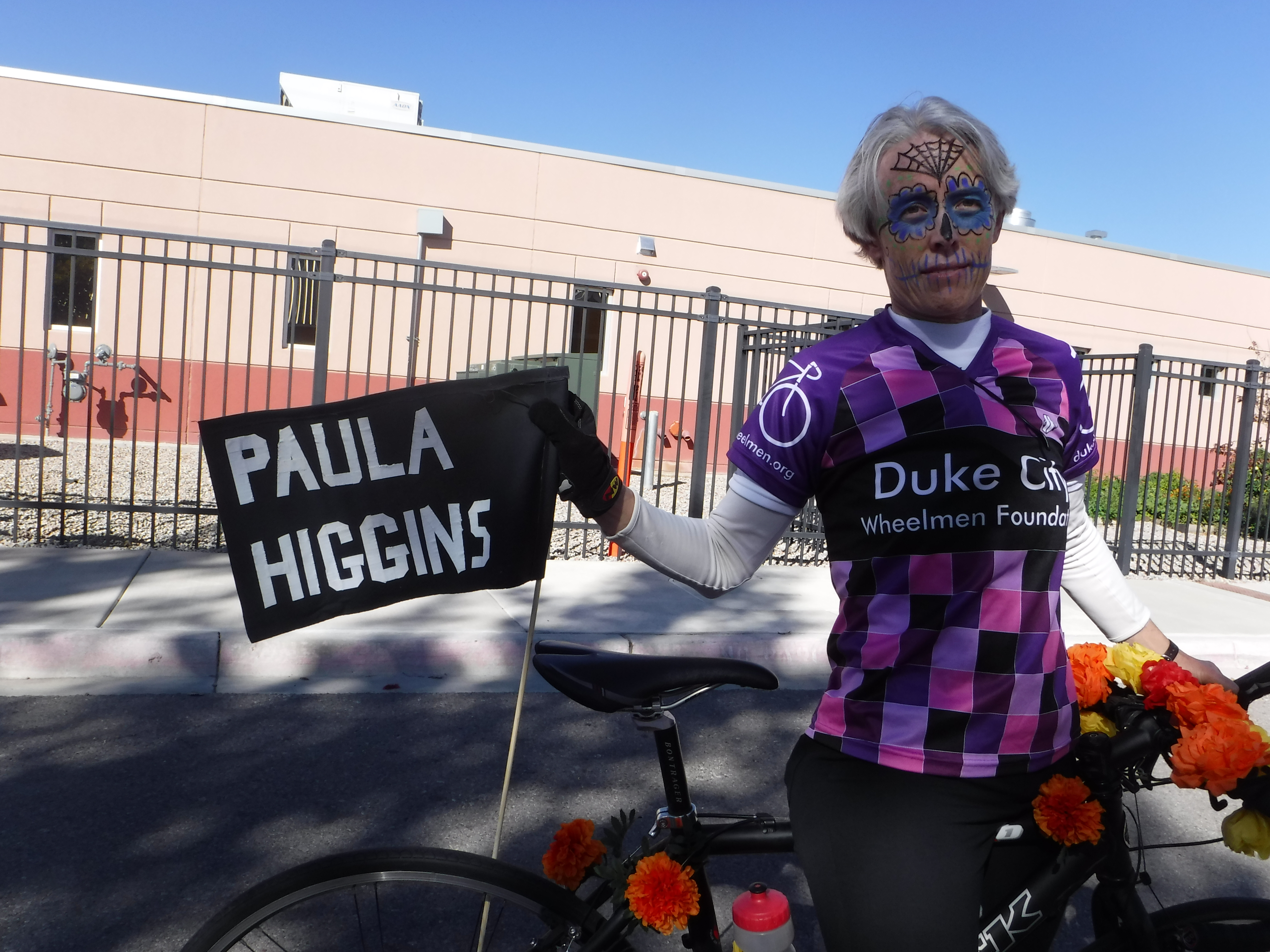 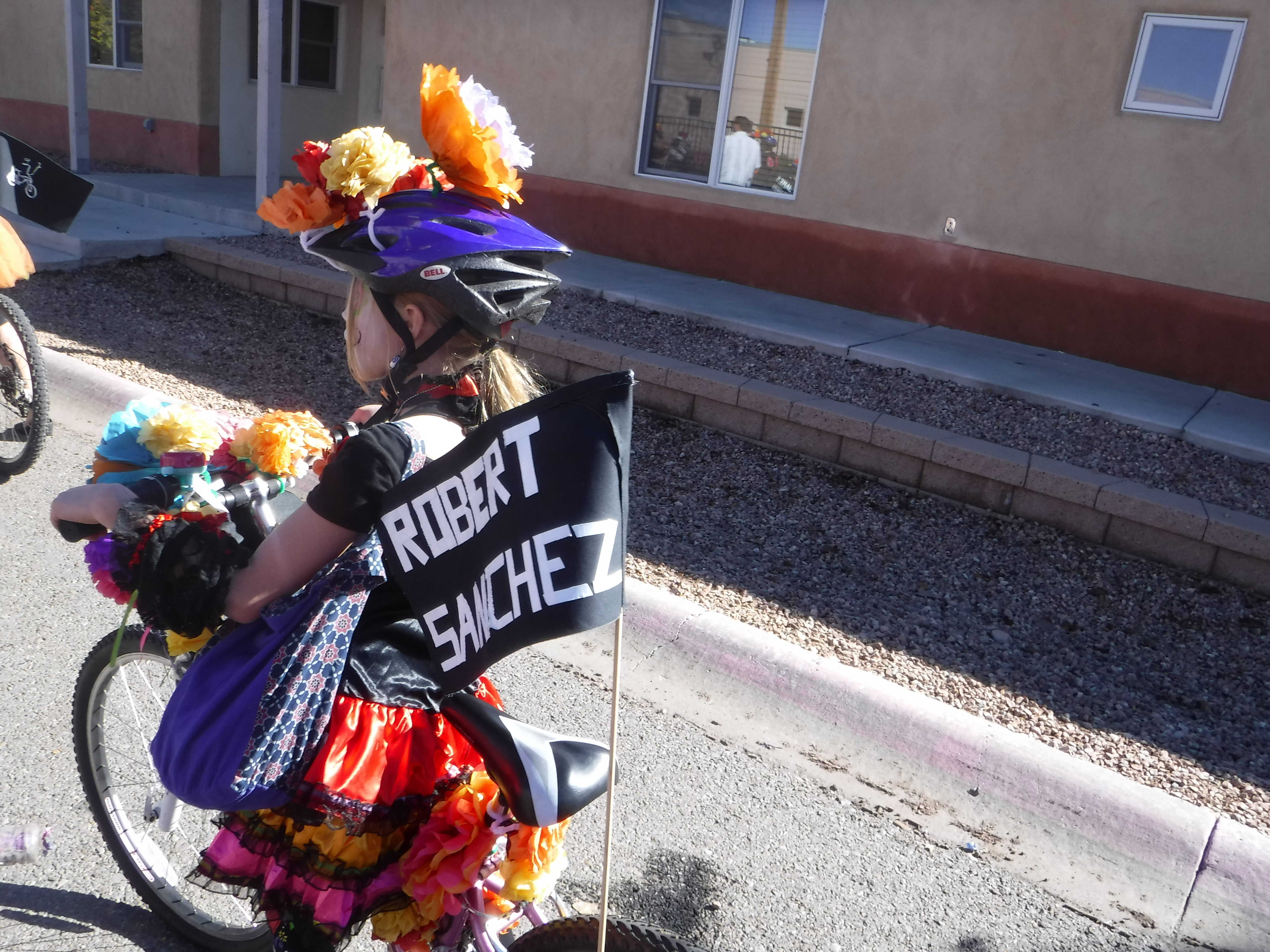 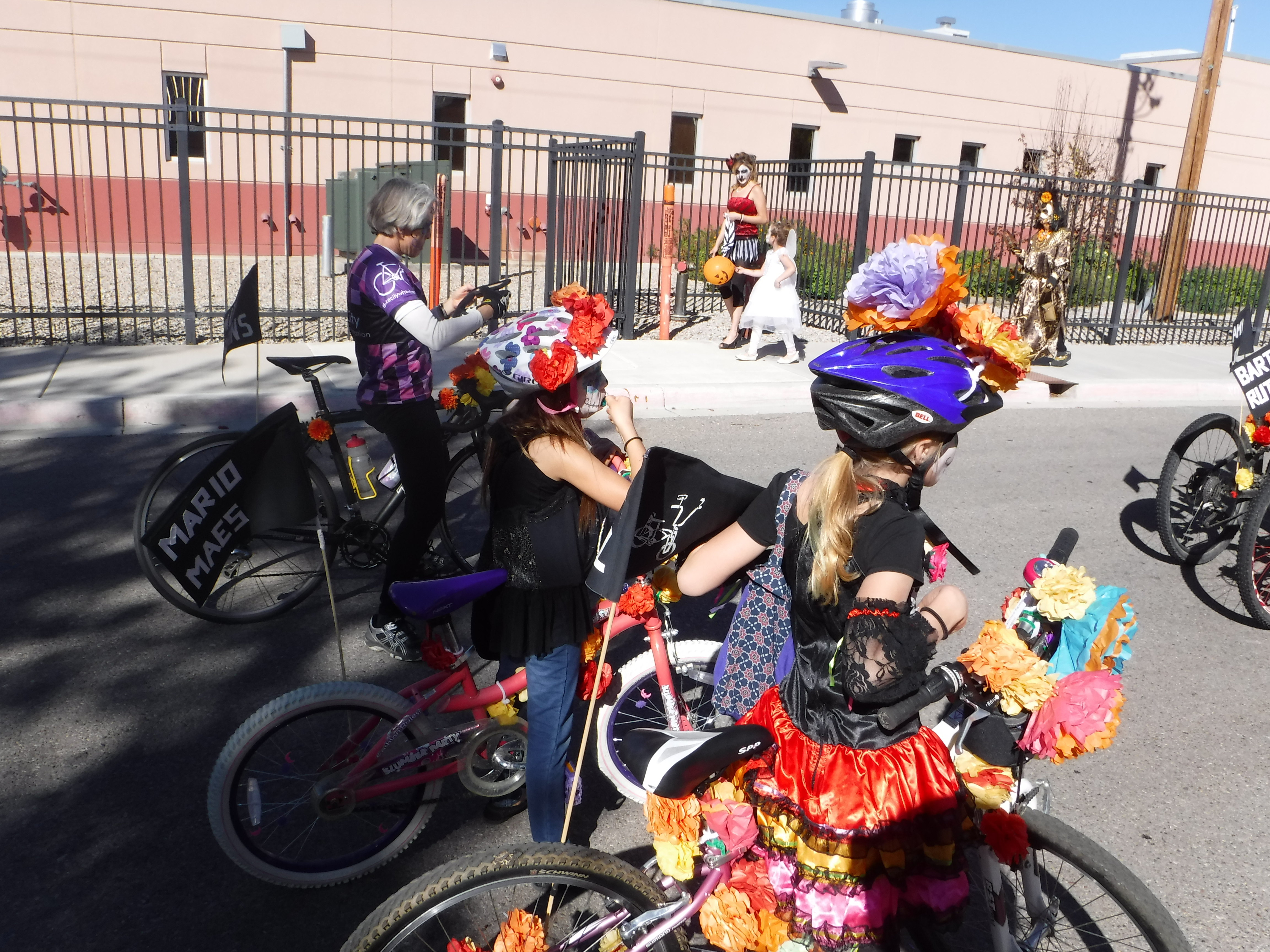 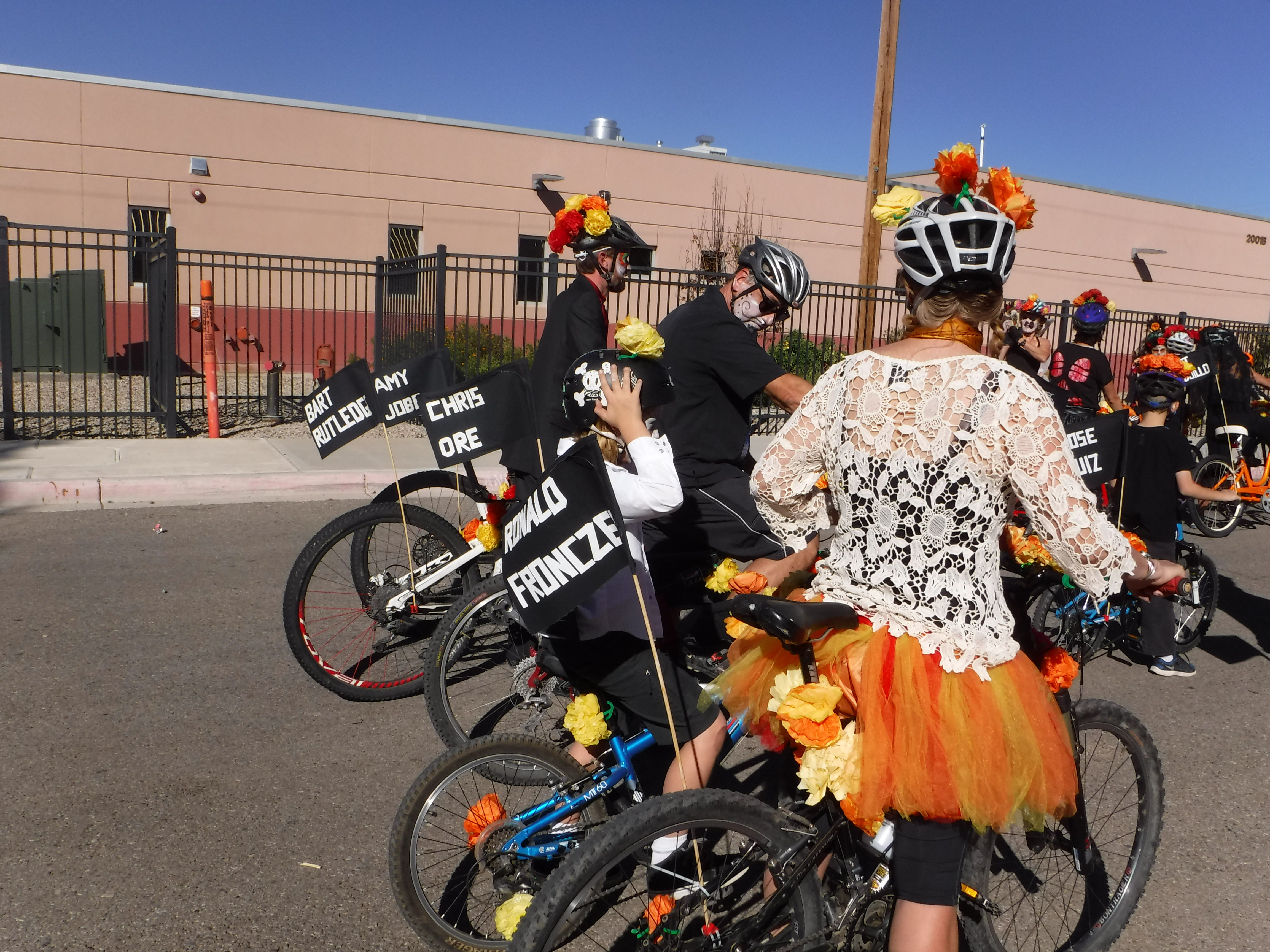 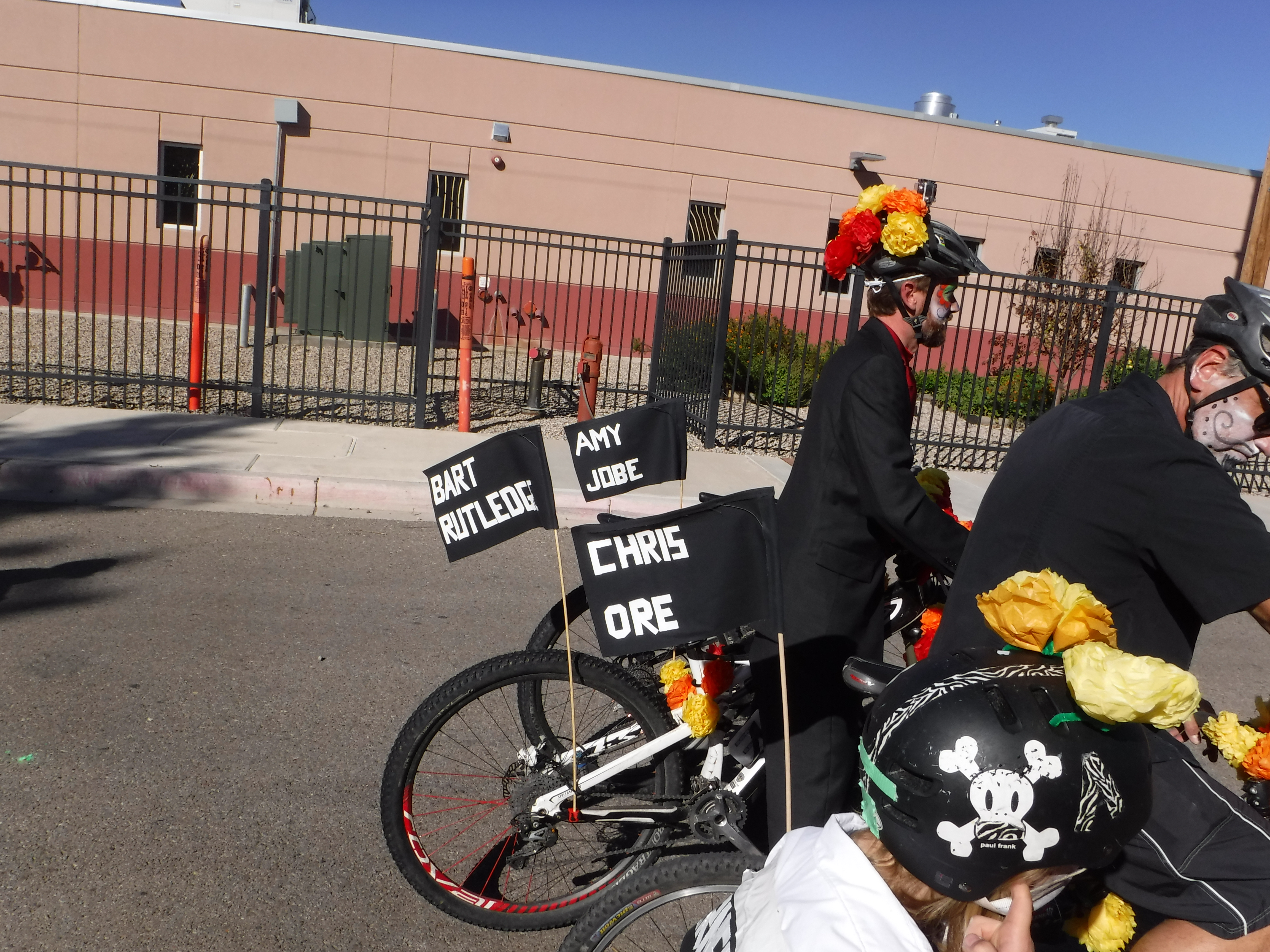 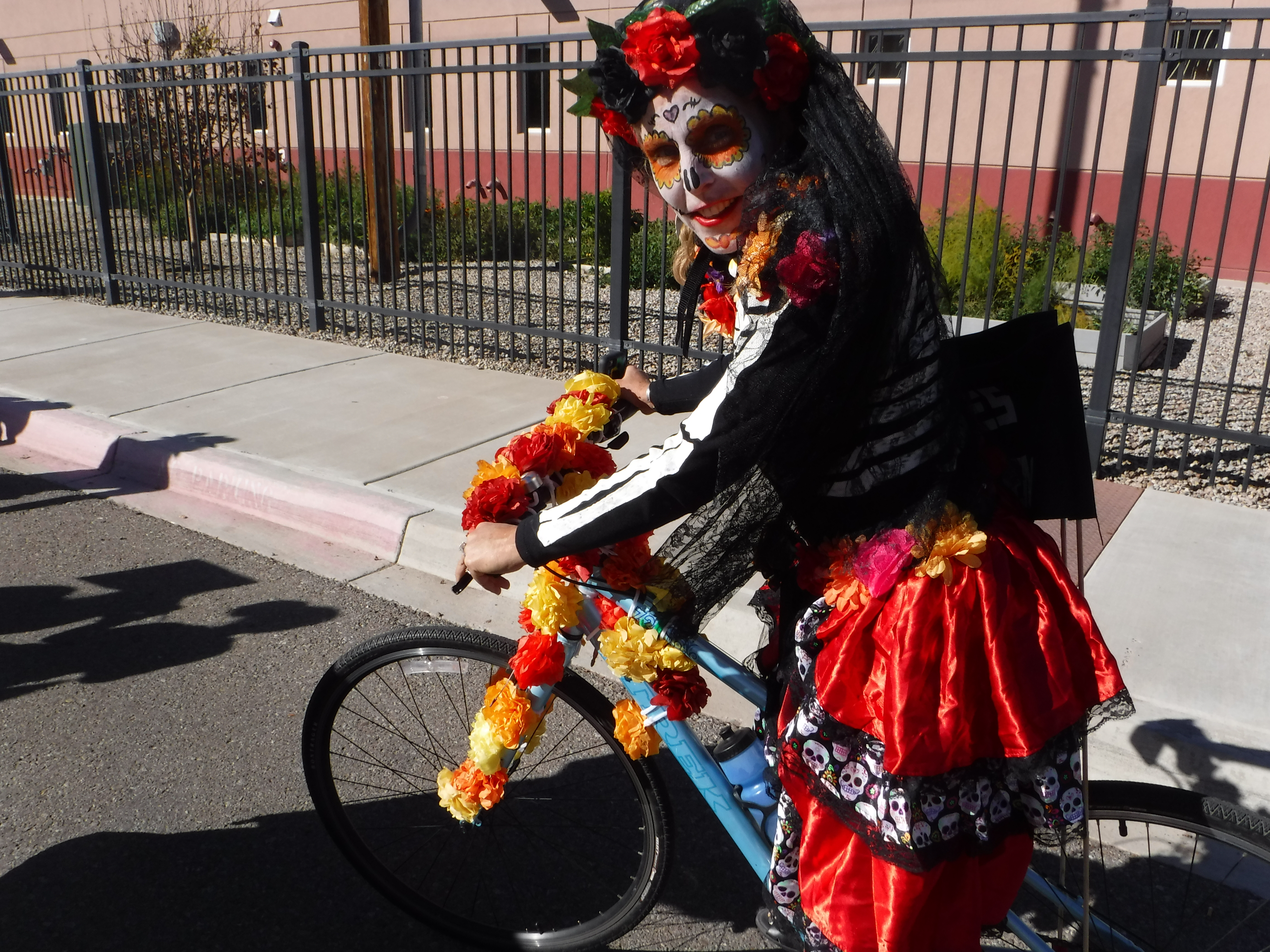 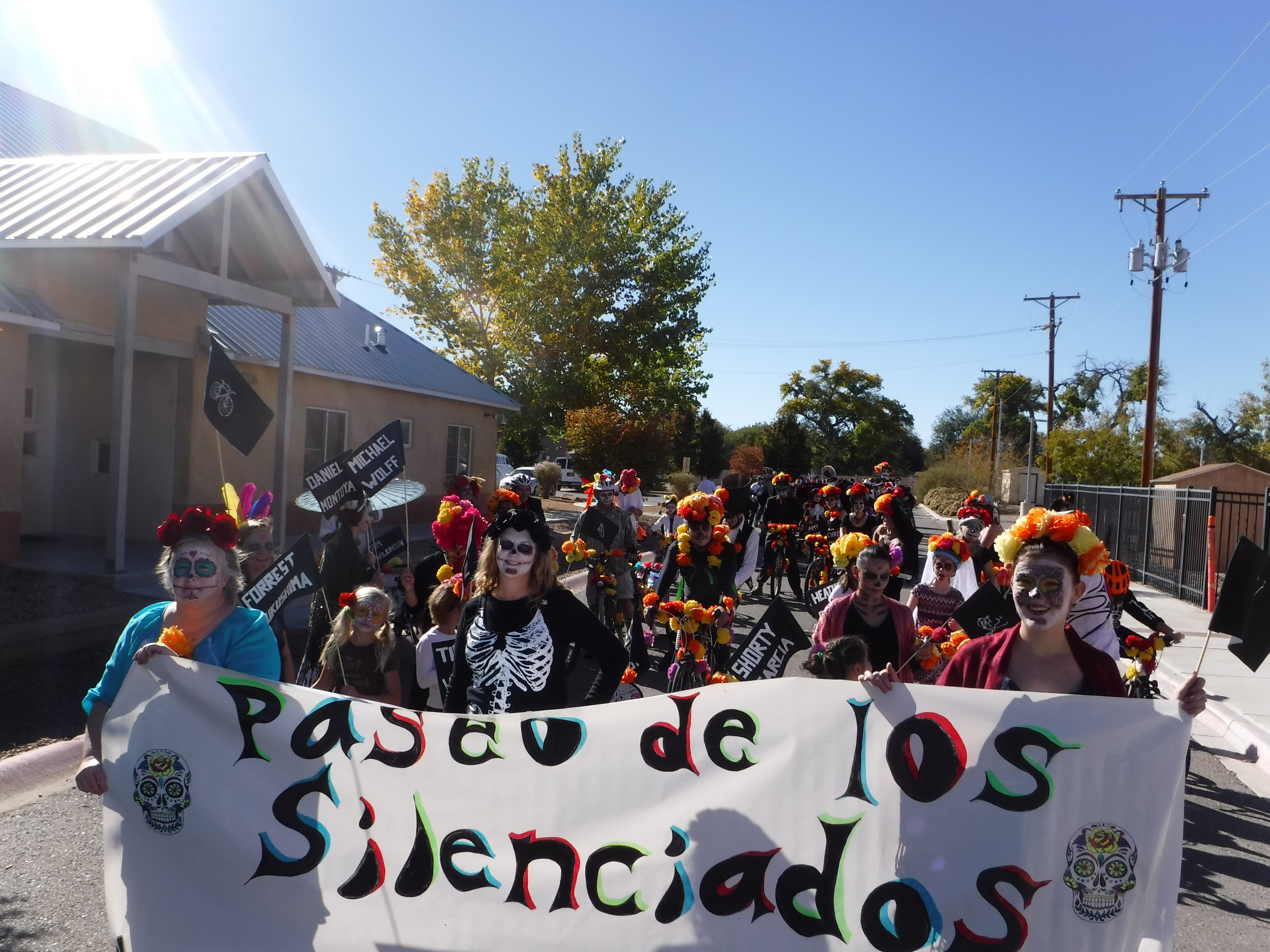 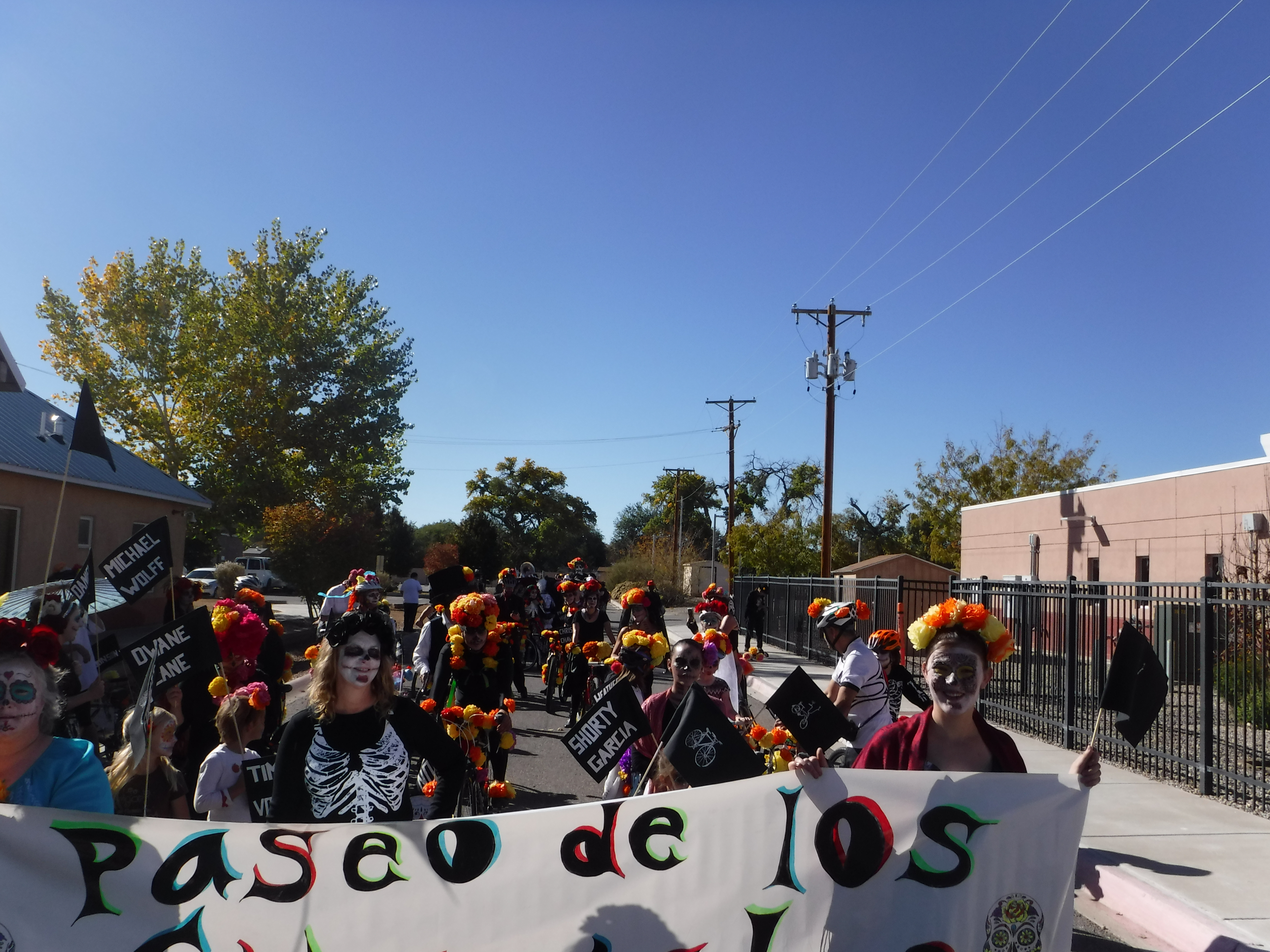 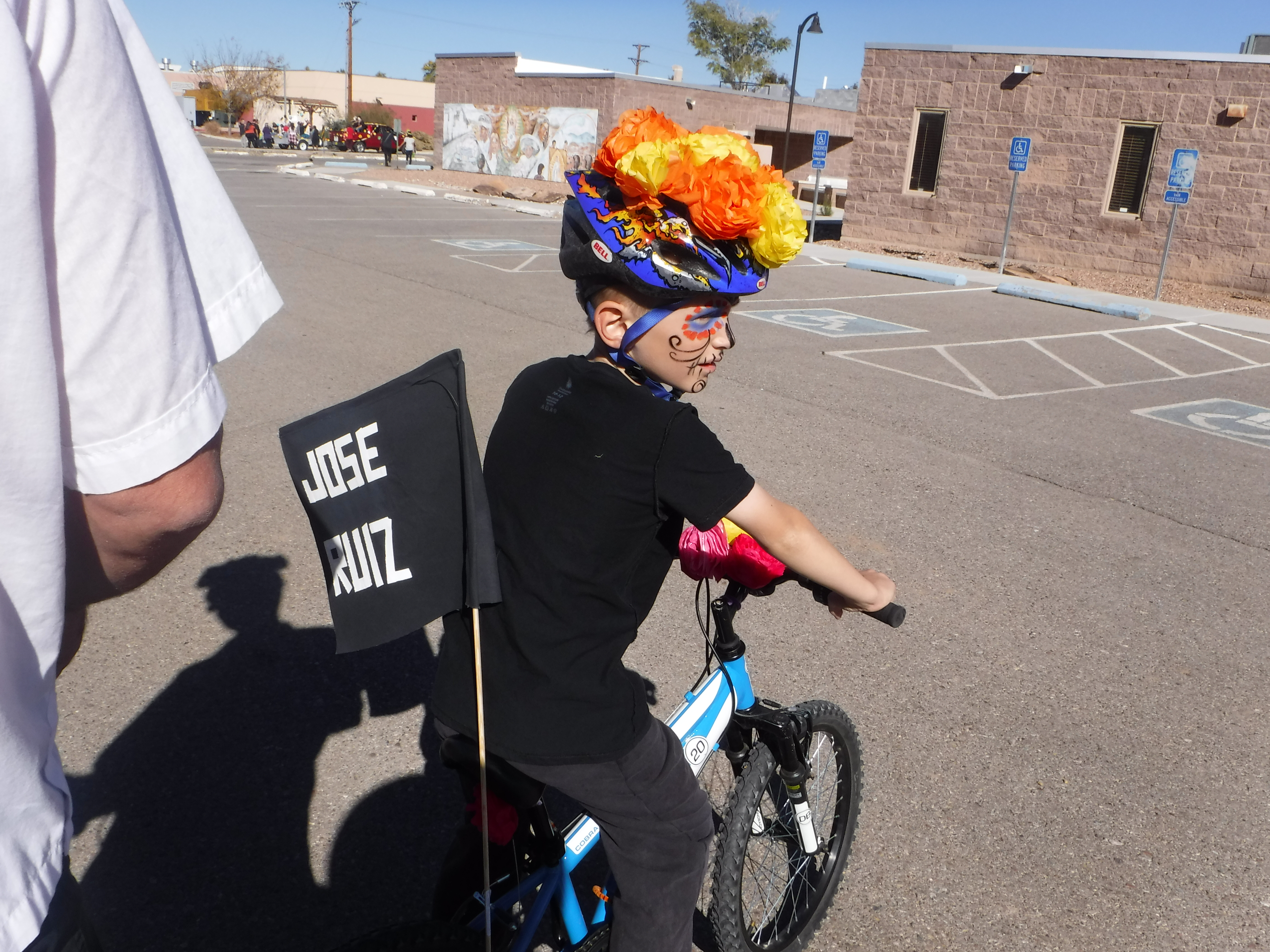 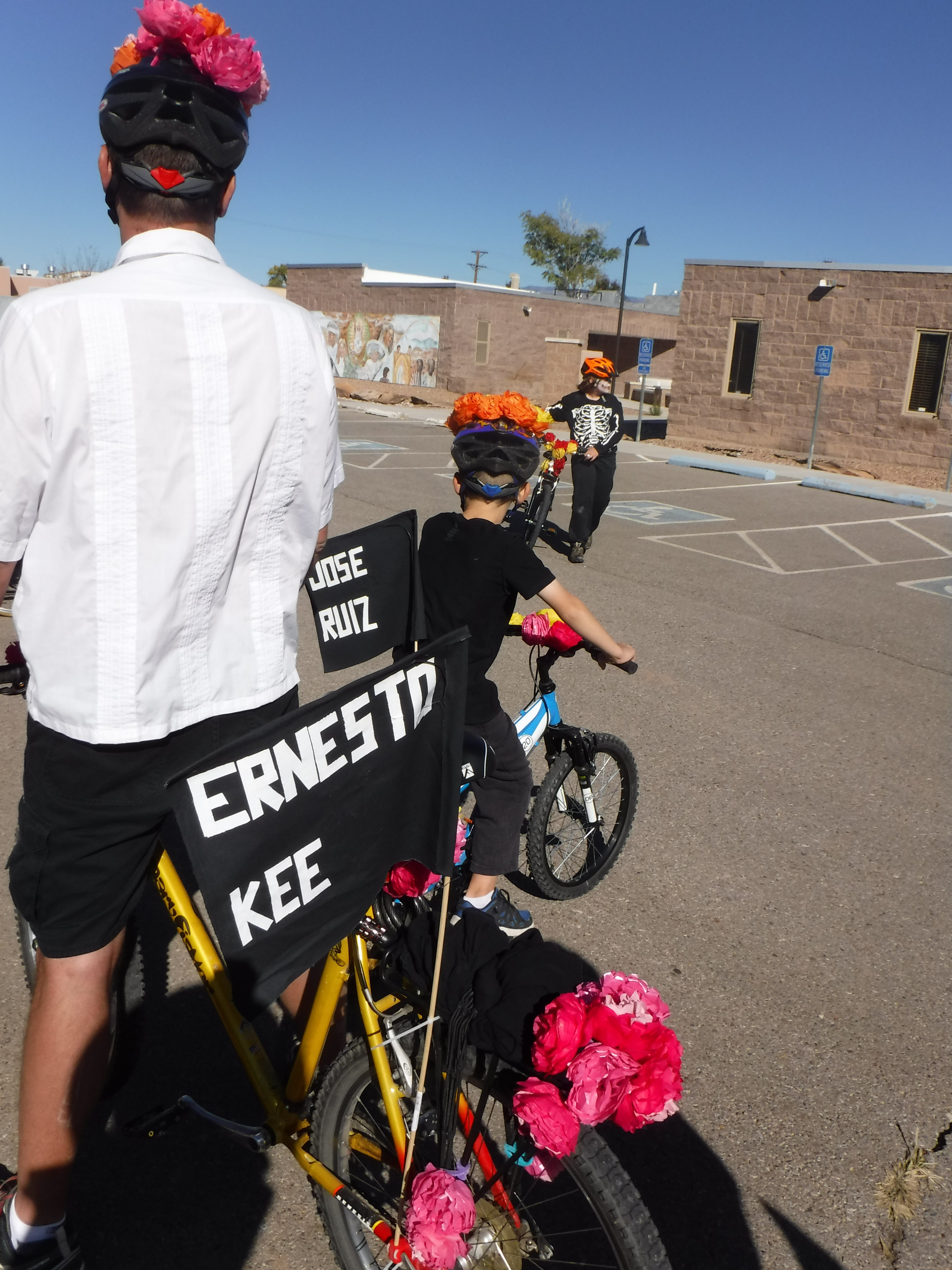 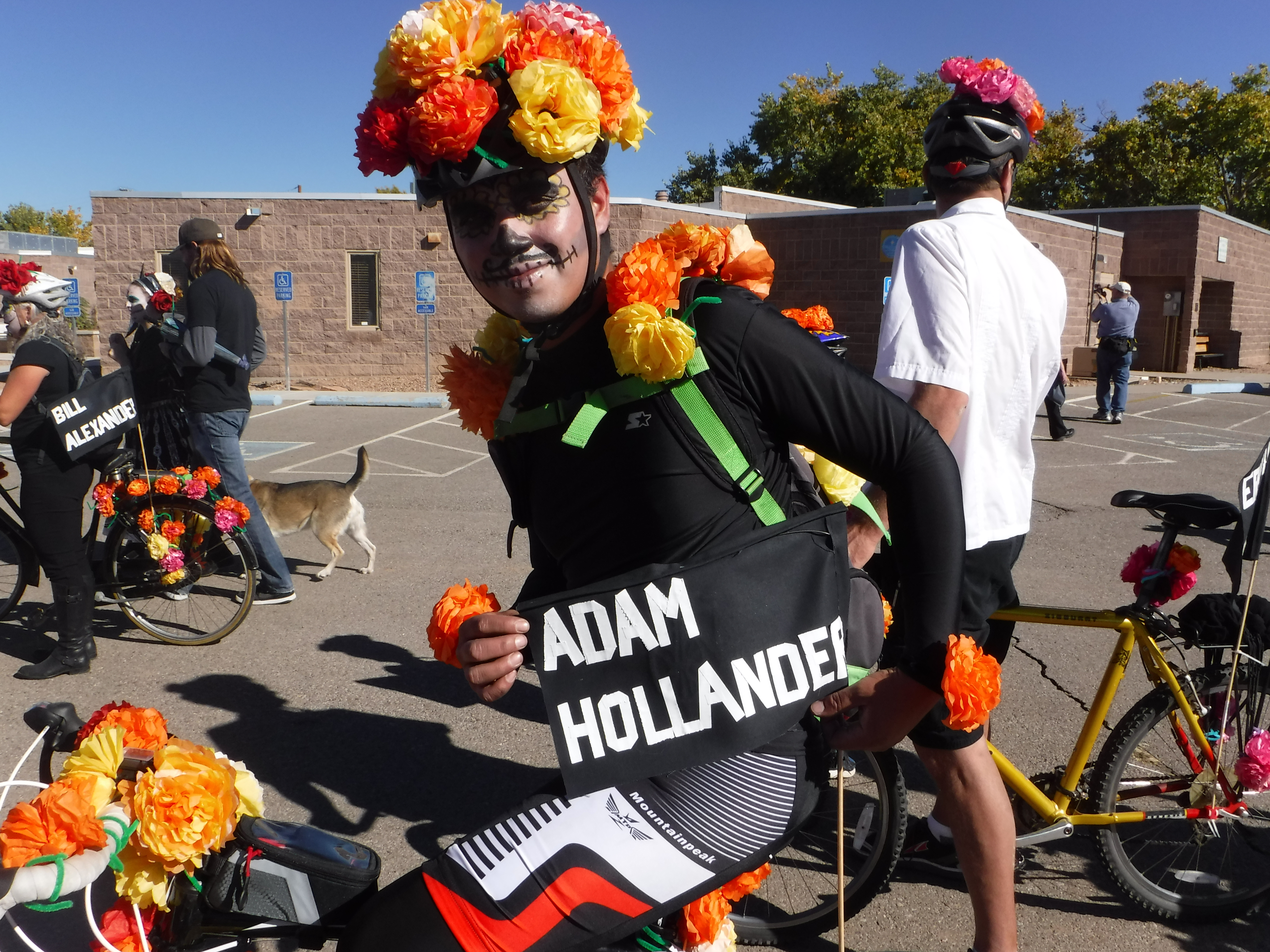 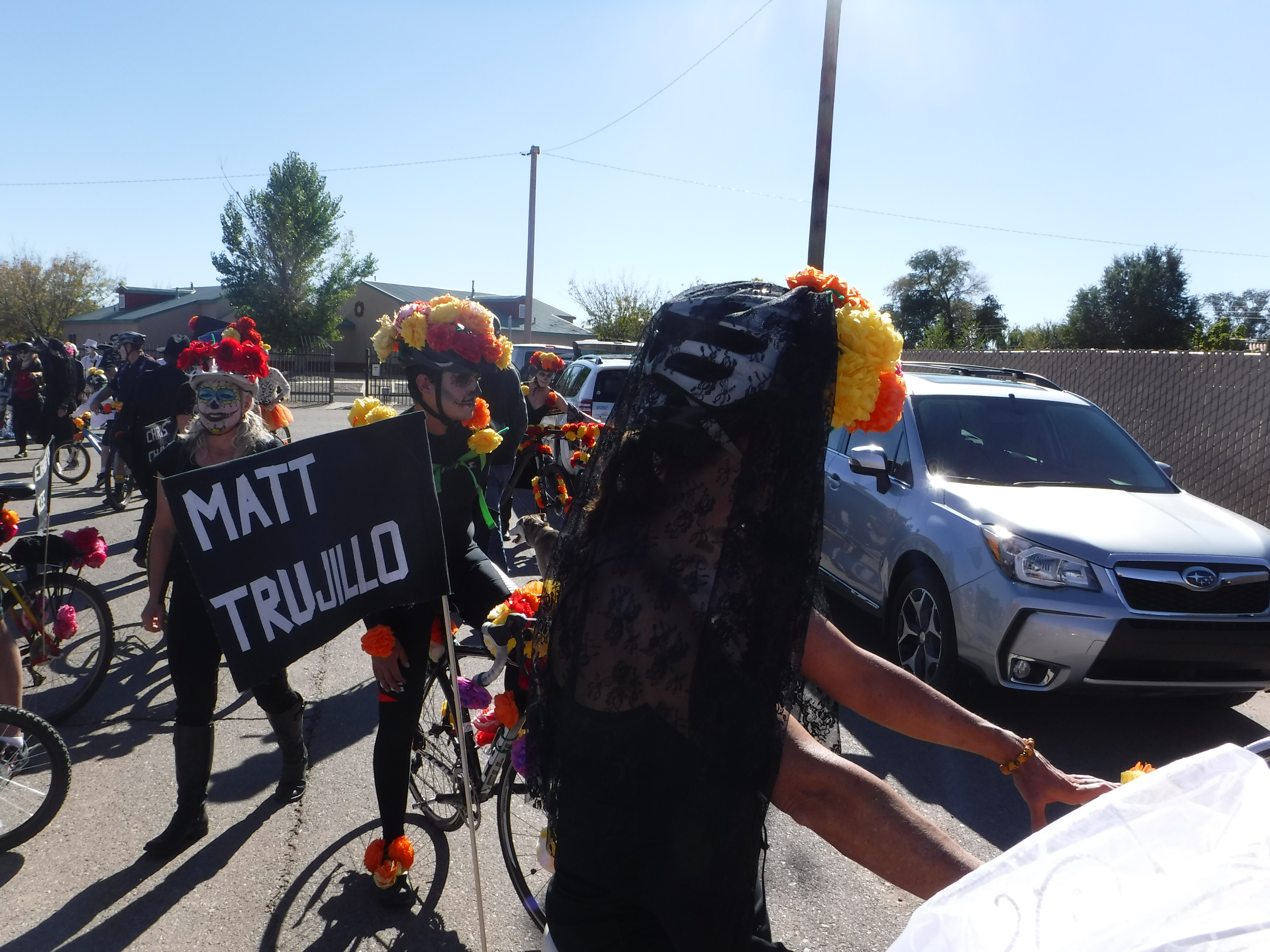 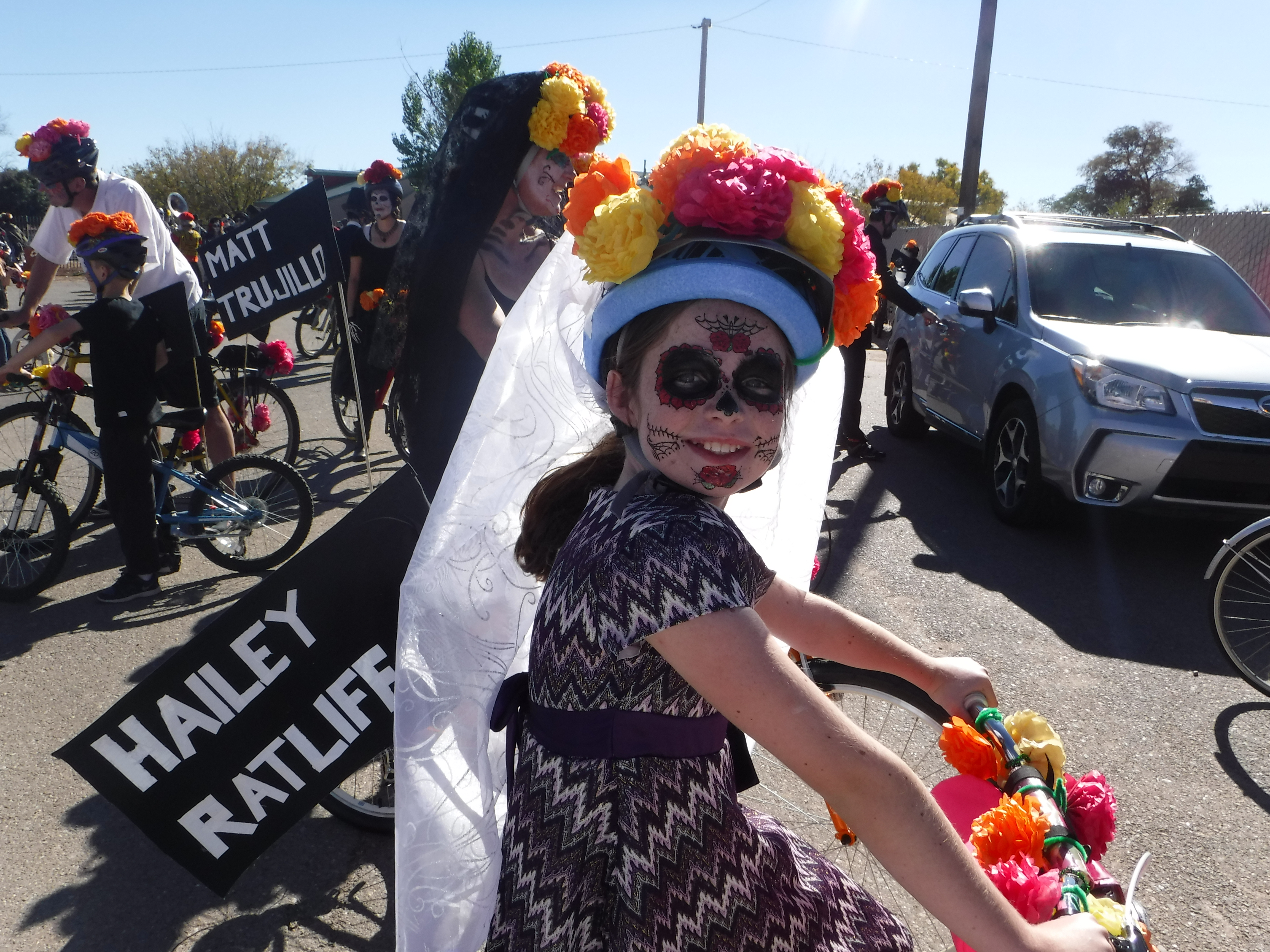 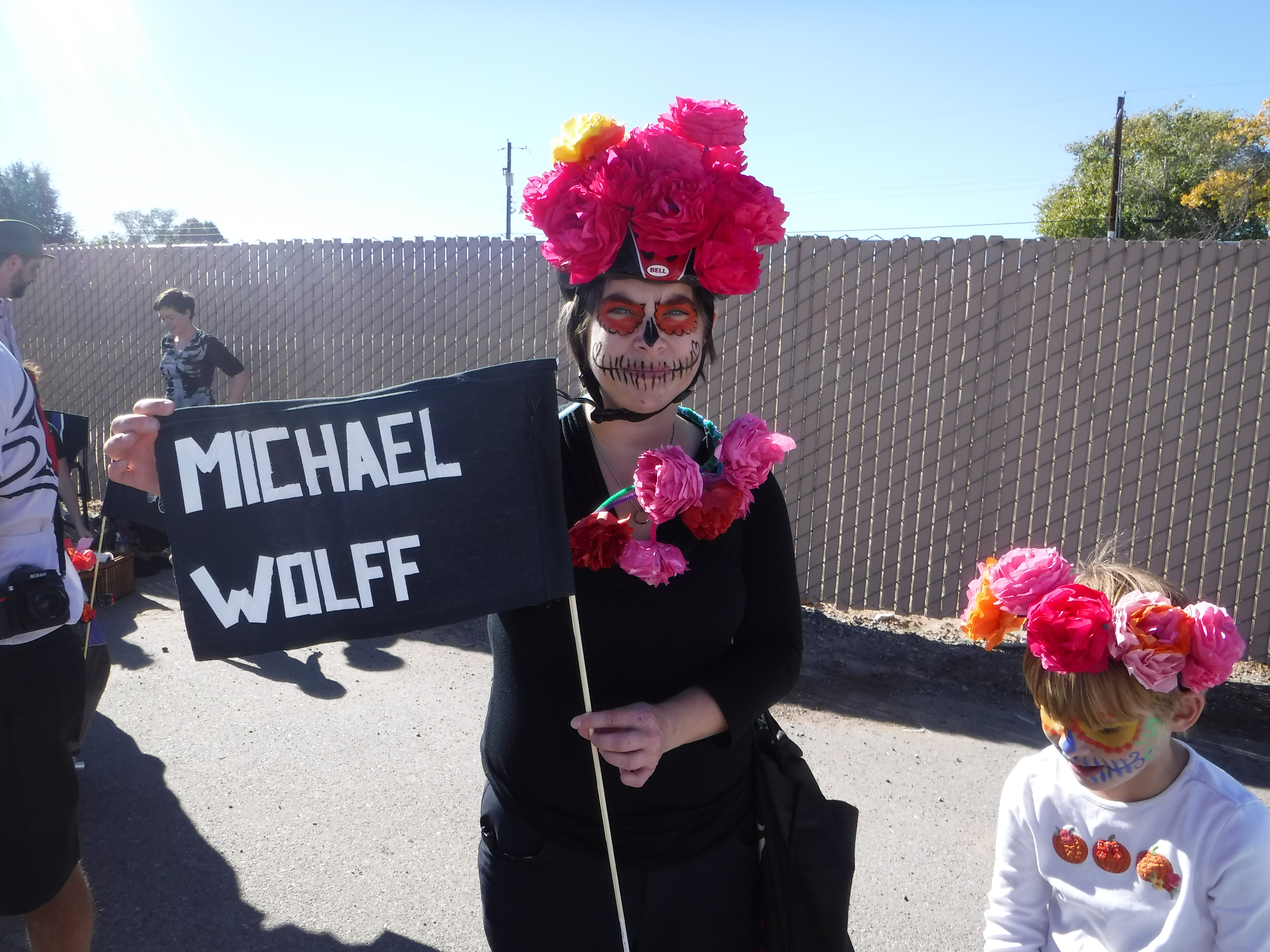 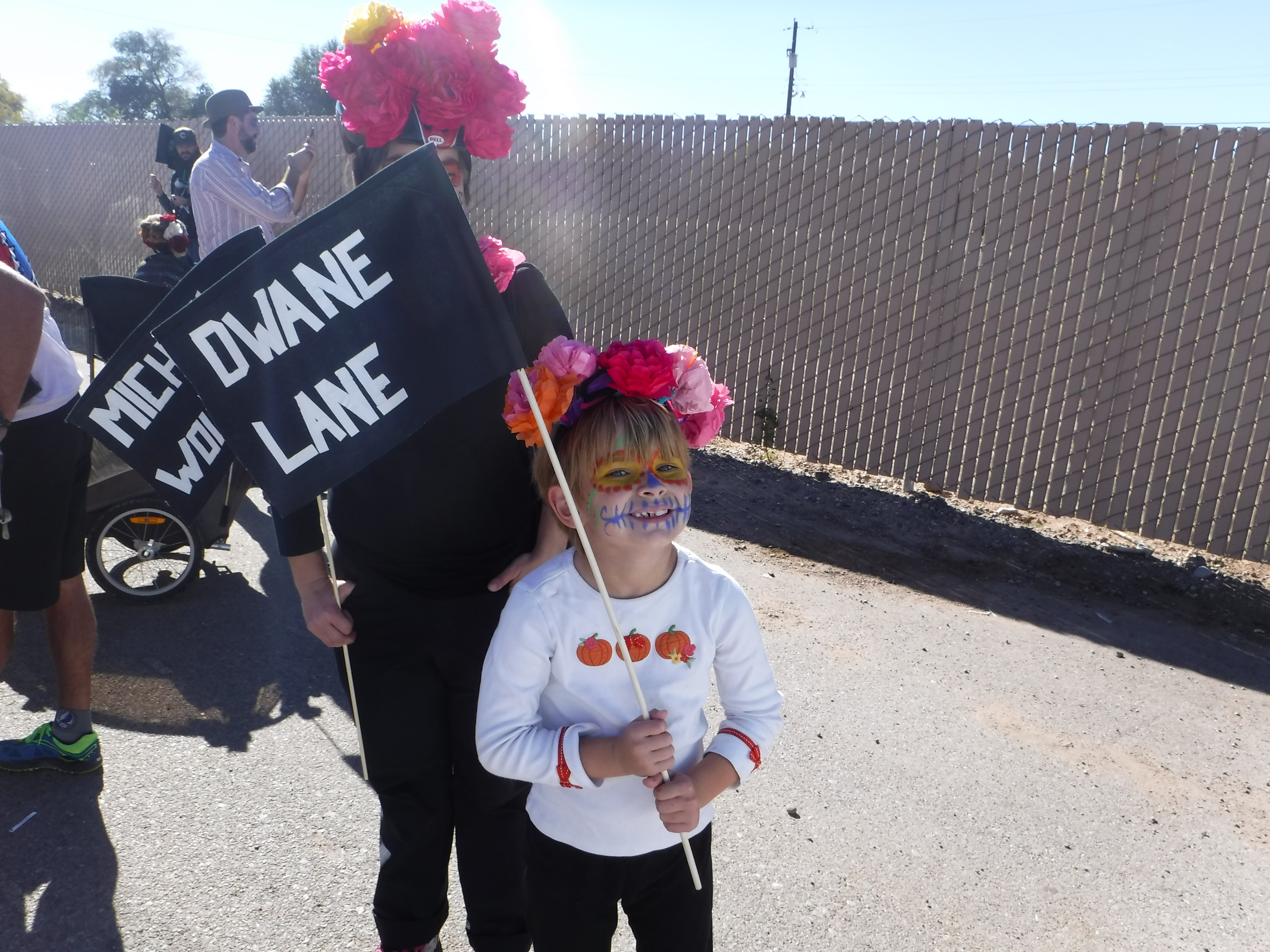 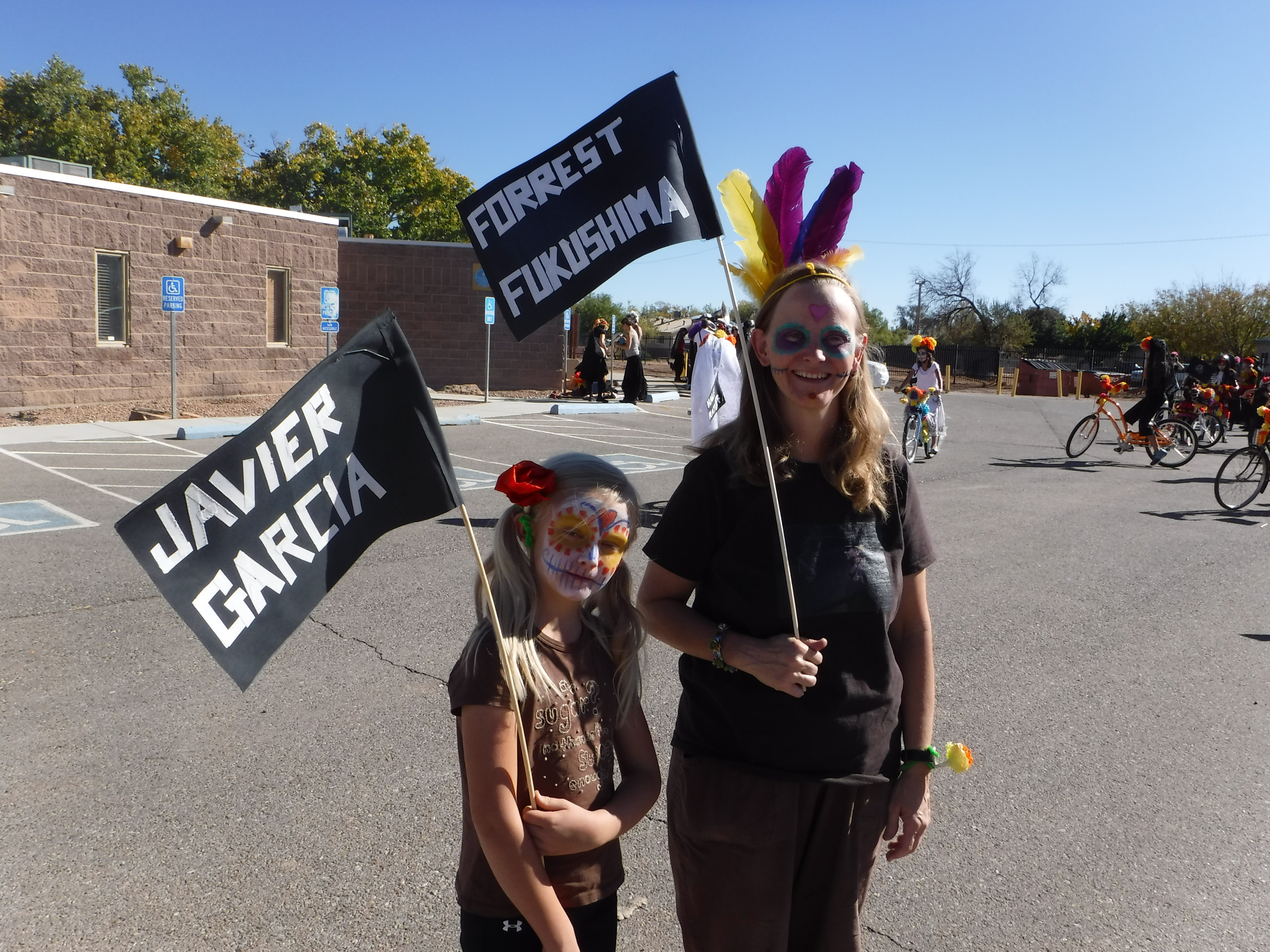 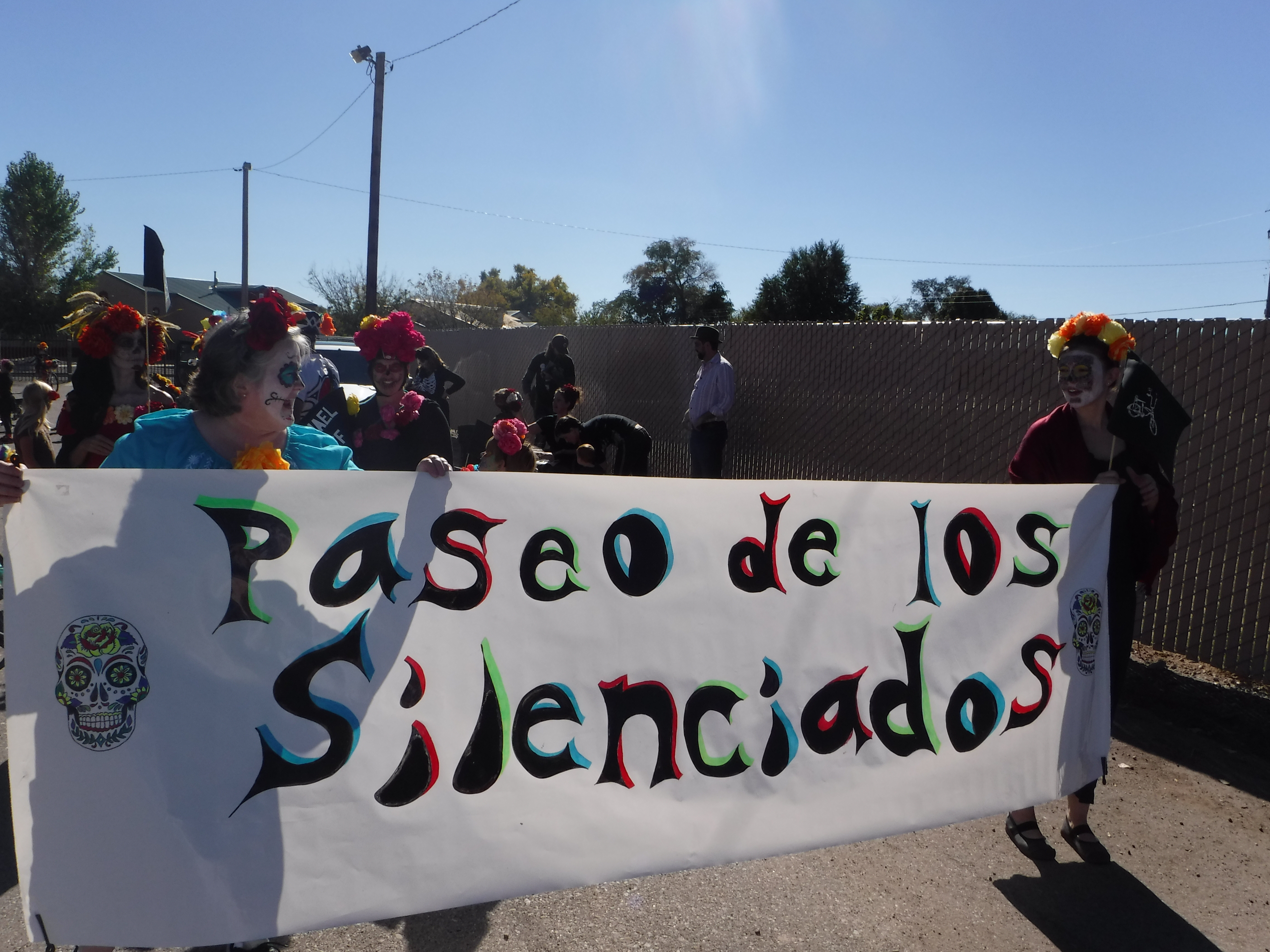 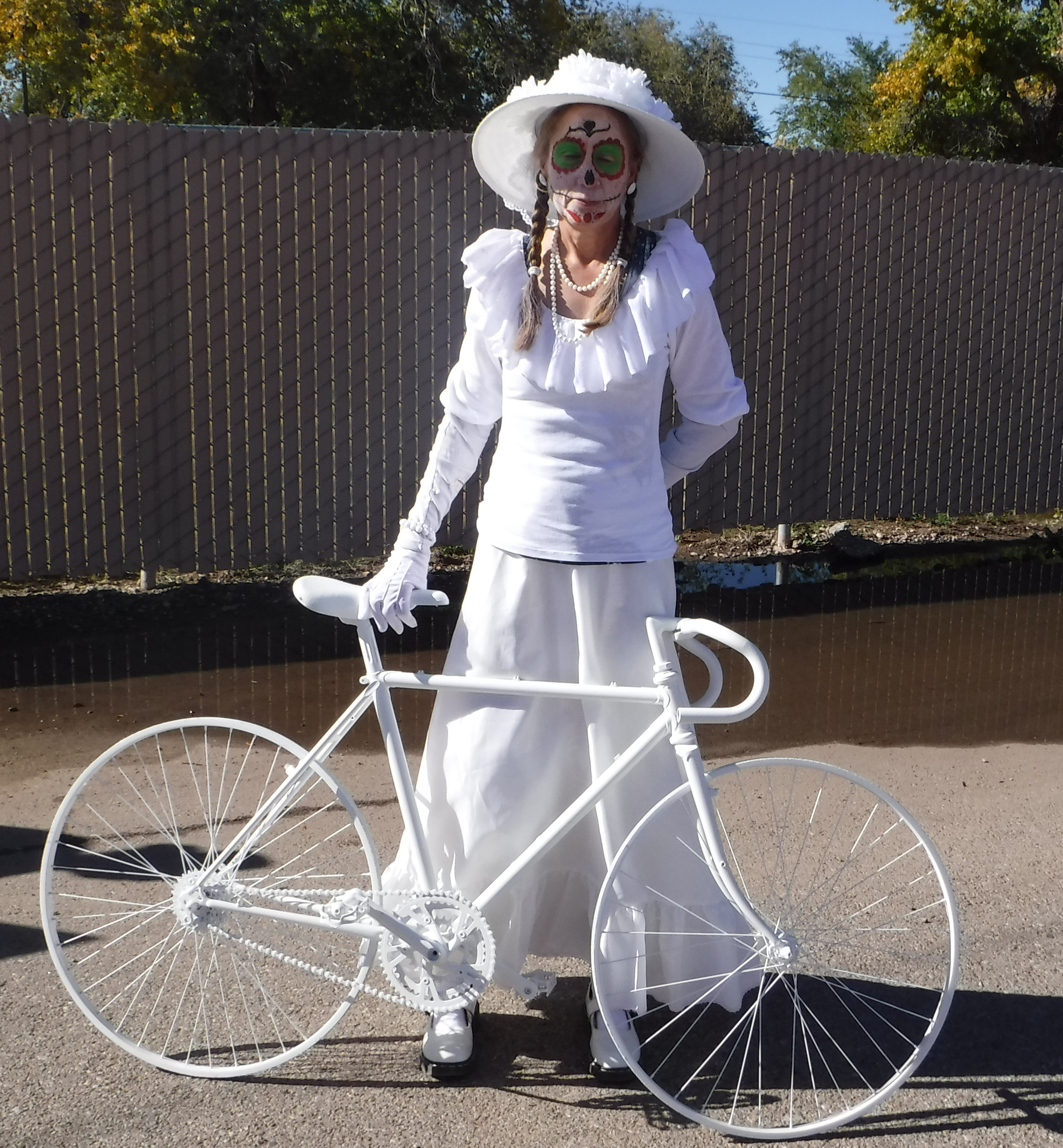 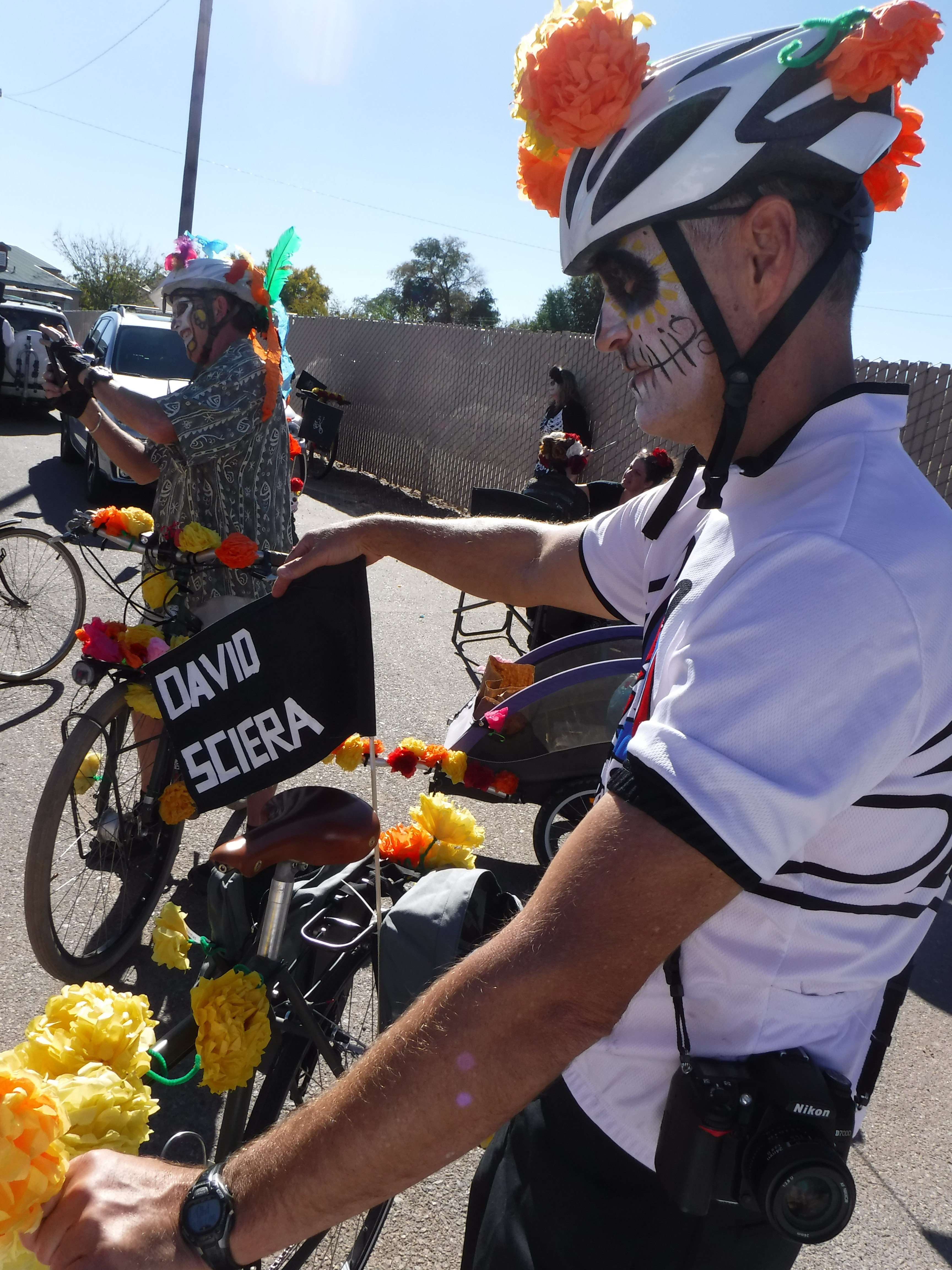 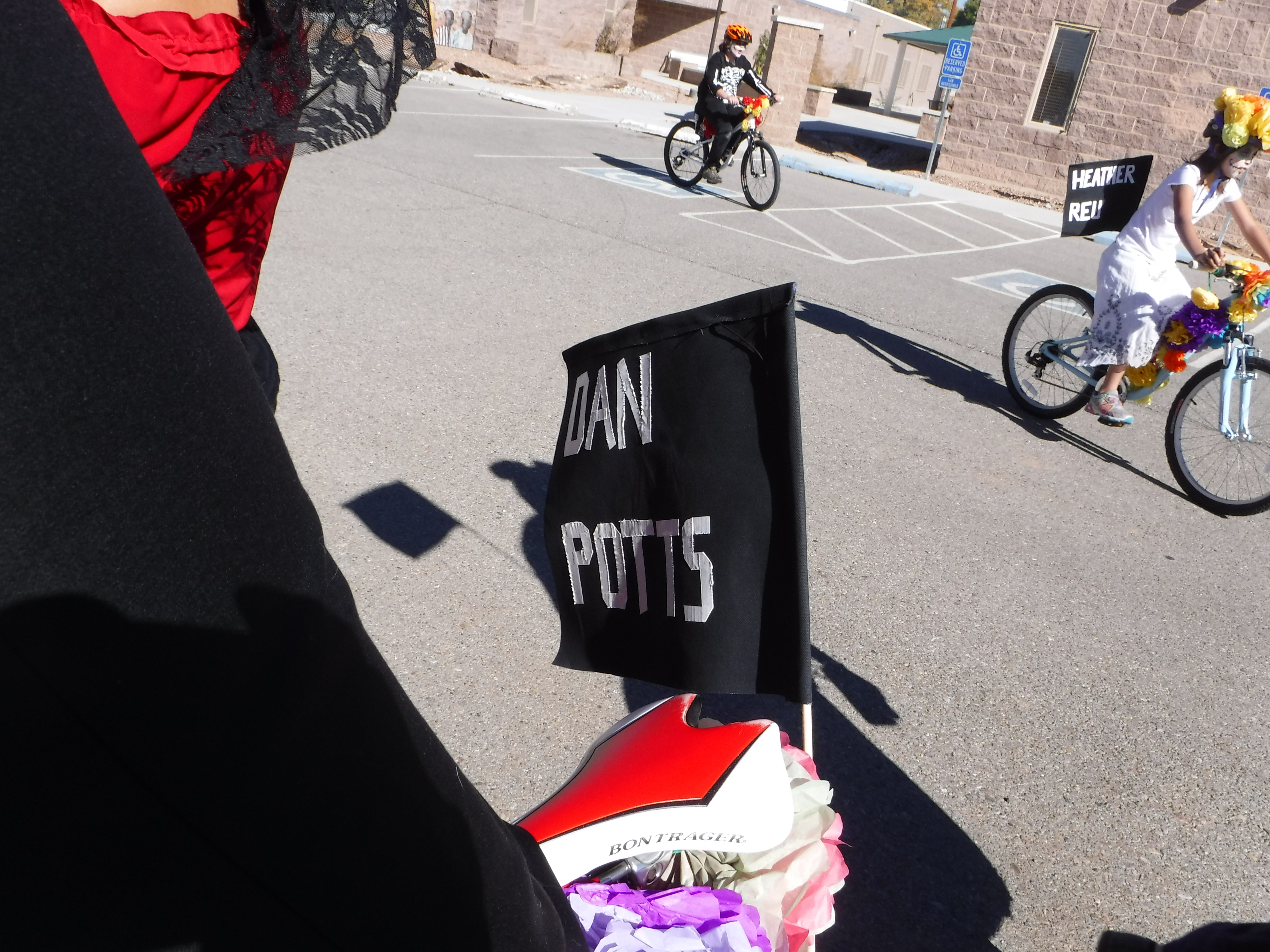