Join us January 27th in Santa Fe, at the Nation’s only round State House for this safe street and highway advocacy event!

The event is FREE
For lunch at NM Bike-N-Sport or Railrunner fare,
please let us know you are coming
<RSVP@BikeABQ.org>

This annual event draws attention to bicycle and motorcycle safety on NM streets and highways. The New Mexico Motorcyclist Right Organization is the main event sponsor. Cyclists are encouraged to attend! 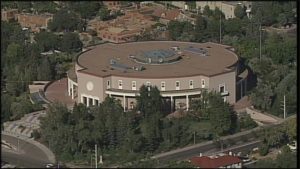 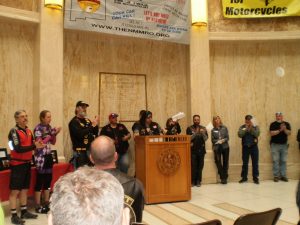 All types of alternative vehicles face the same problems on the road: Car and truck drivers don’t see us. On Saturday, January 27, 1:00PM at the State Capitol, add your voice to the call for improved road safety. 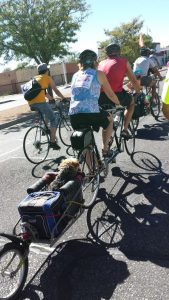 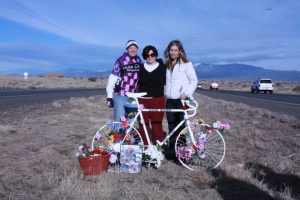 8:15 am – Downtown Railrunner Station: Ride Railrunner to Santa Fe <email: RSVP@BikeABQ.org> to have the fare paid!!

11:00 am – NM Bike N Sport (504 W Cordova Rd): Bicyclists meet for LUNCH and then walk or cycle to the New Mexico State Capitol Building (bring a bike lock – No bicycles in the Capitol) 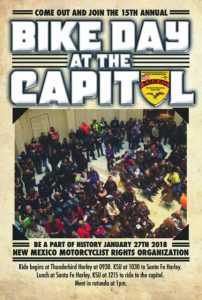 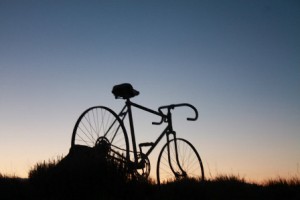 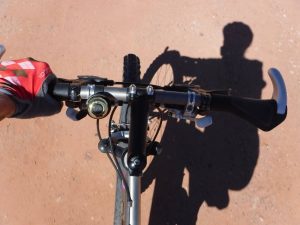 Tell NMDOT how to make New Mexico better for Bicycles! 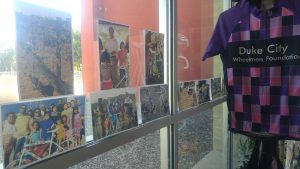 The National Hispanic Cultural Center is hosting an Ofrenda exhibition again during this time leading up to the Dia de los Muertos Despedida on November 3, 2017.

Most Ofrendas at NHCC are created by school children from across the City.
Duke City Wheelmen is proud to be included in this tradition.  We have created Ofrendas since 2010, initially with the help of Jacobo de la Serna.

This year’s Ofrenda was the result of the work of Steve Mathias, Dave Hamilton, Carolyn Donnelly and Jennifer Buntz. 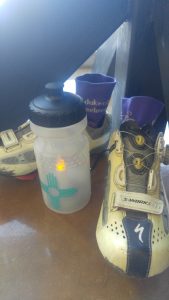 Go by National Hispanic Cultural Center and see all the Ofrendas 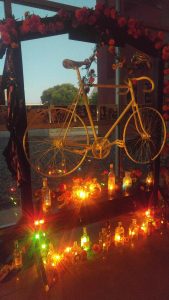 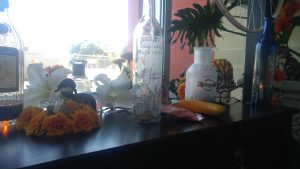 In April and again in June people using multi-use paths in Santa Fe that cross Rail Runner tracks rode out into the path of an oncoming train.  These two individuals died.  These multi-use paths have no safety arms or warning lights of their own.

On the other hand, people using city streets in Santa Fe while (typically) driving motor vehicles, encounter warning lights and arms specifically designed to stop them from driving into the path of the very same trains.

No one questions the presence of these safety devices on streets or highways.  Departments of Transportation across the country realize that people need help in avoiding these collisions.  Rail Runner/street crossings that don’t have arms or warning lights have been sites of motor vehicle/train crashes elsewhere in the State (between Los Lunas and Belen).  Pedestrians have been killed at other unmarked crossings in Bernalillo County.

When considering multi-use paths, it isn’t accurate to think only cyclists use them.  Path users routinely include children, elderly, disabled people, or those without the means or inclination to drive a motor vehicle.  They also include those crazy enough to exercise outdoors – cyclists, runners, walkers, roller bladers, etc.

Are any of us really comfortable saying that this diversity of path users should be held to a higher personal standard for their safety at a track crossing compared to motor vehicle drivers?  Said another way;

Why not protect all road and path users equally?

A website devoted to train track crossing safety posted A motorist is almost 20 times more likely to die in a crash involving a train than in a collision involving another motor vehicle.   Comfortably, I’ll say that the likelihood of a path user dying from being hit by a train is even higher.

These crashes are always difficult to understand.  What are people thinking?  How can they not see or hear the train?  Both the recent victims of bicycle/train collisions lived in Santa Fe.  How could they not know about the trains!?

You might think that the closer we are to home the more familiar we are with potential hazards, like on-coming trains, and the better we would be at avoiding those hazards.  If you do think that, think again.  According to the National Highway Traffic Safety Administration (NHTSA) at U.S. DOT:

What this says to me is that people are, well, people.  We make mistakes.  We get comfortable with what is the most familiar and sometimes that lets us drop our guard.  While this can be a good thing in an interpersonal relationship, it isn’t so good with respect to traffic safety.

As people, we are all quite susceptible to falling into that zoned out, less observant state of mind.  I feel that equal protection from our own potential foibles is in order, no matter how we choose to be mobile on a given day.

I just can’t advocate for separate but unequal.

This time of the year traffic always seems to get a little crazy.  As I worked on freshing up the flowers on Michael Ryan’s ghost bike today, I noticed the traffic.  Mike was riding in a bad place, but as we know, that doesn’t always matter.

Just think if Albuquerque had spent 1% of its traffic infrastructure investments on alternative means of transportation…. 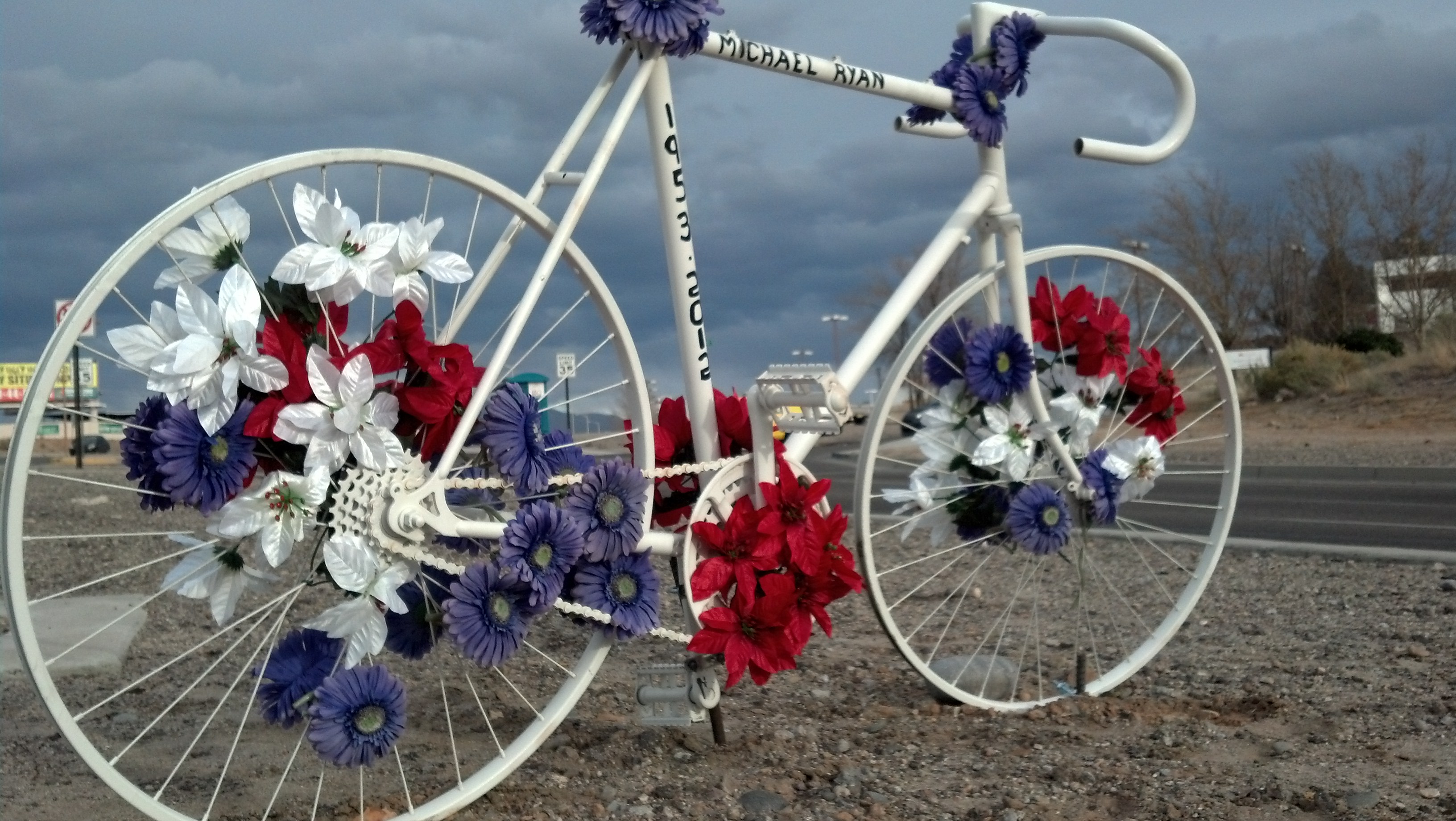 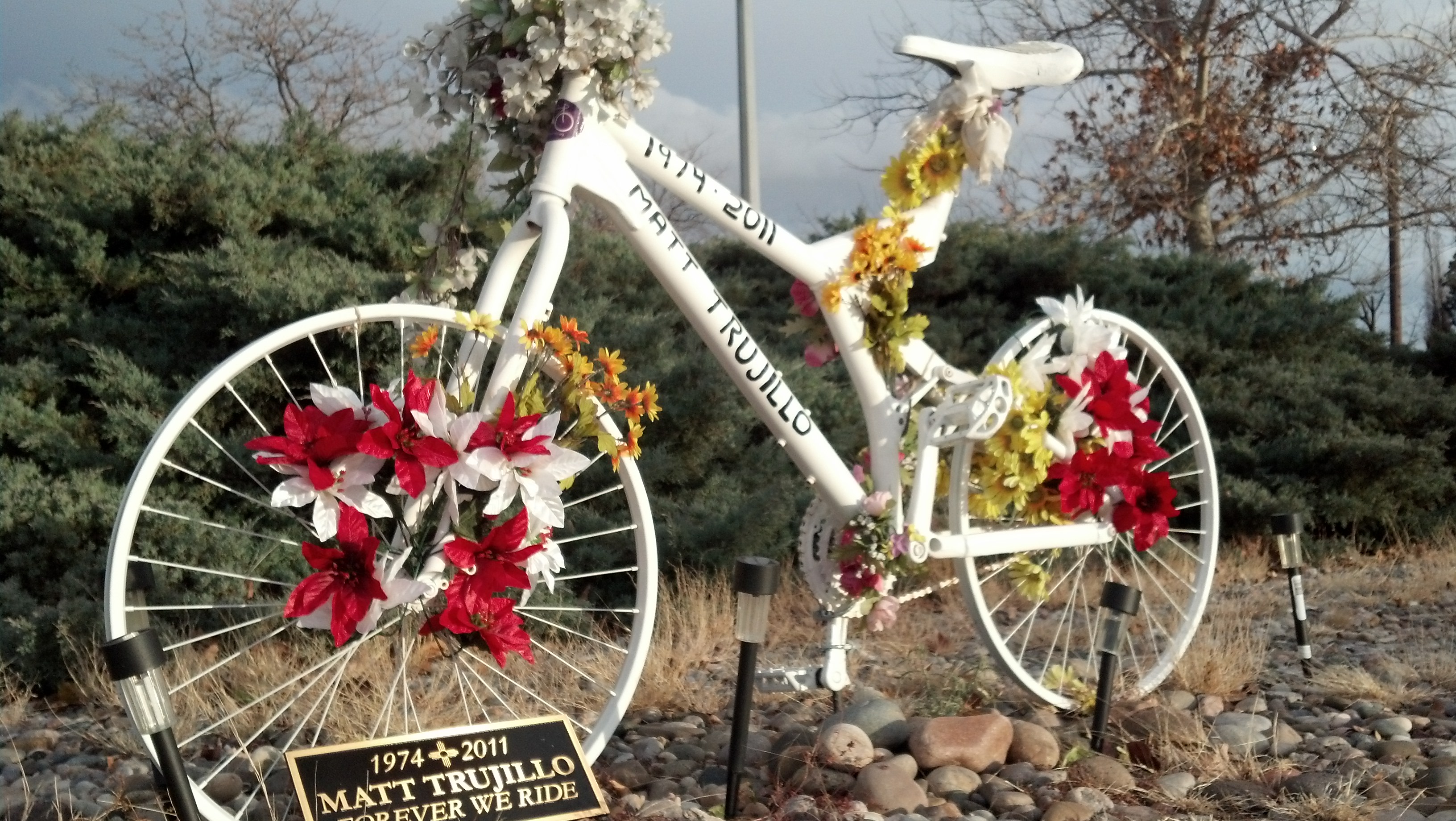 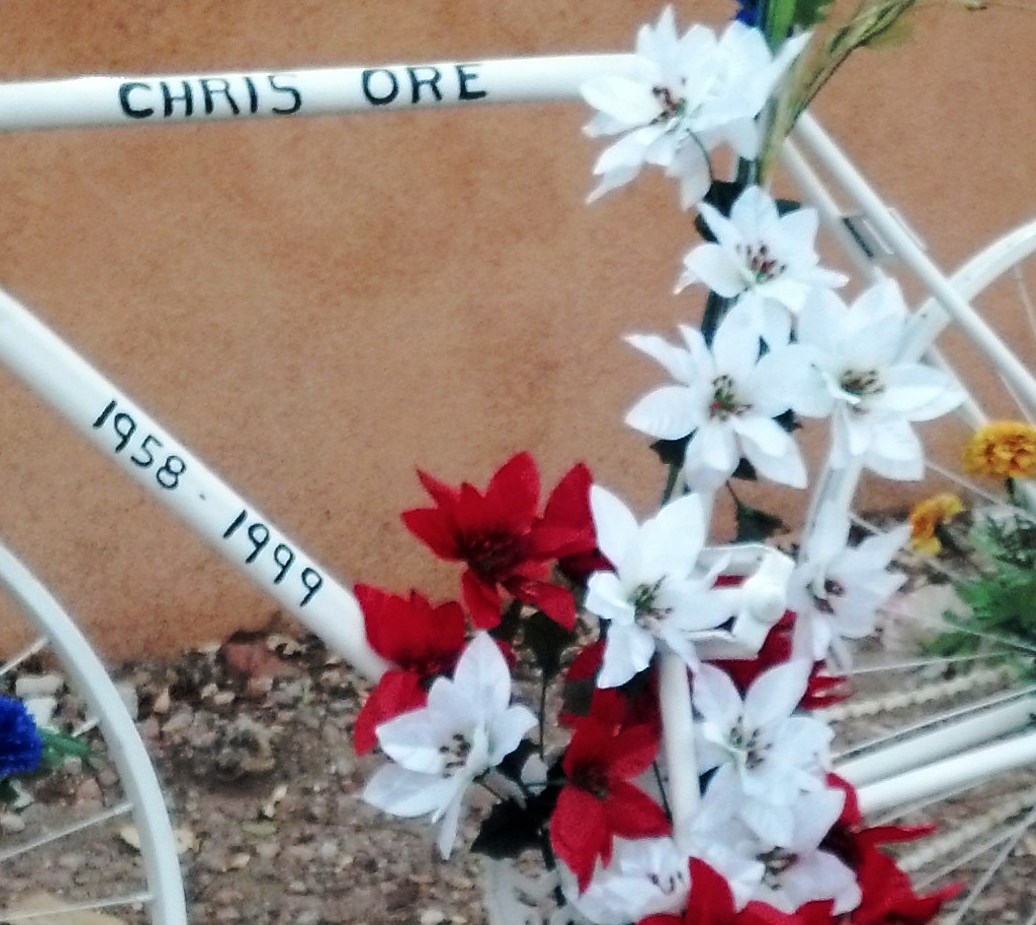 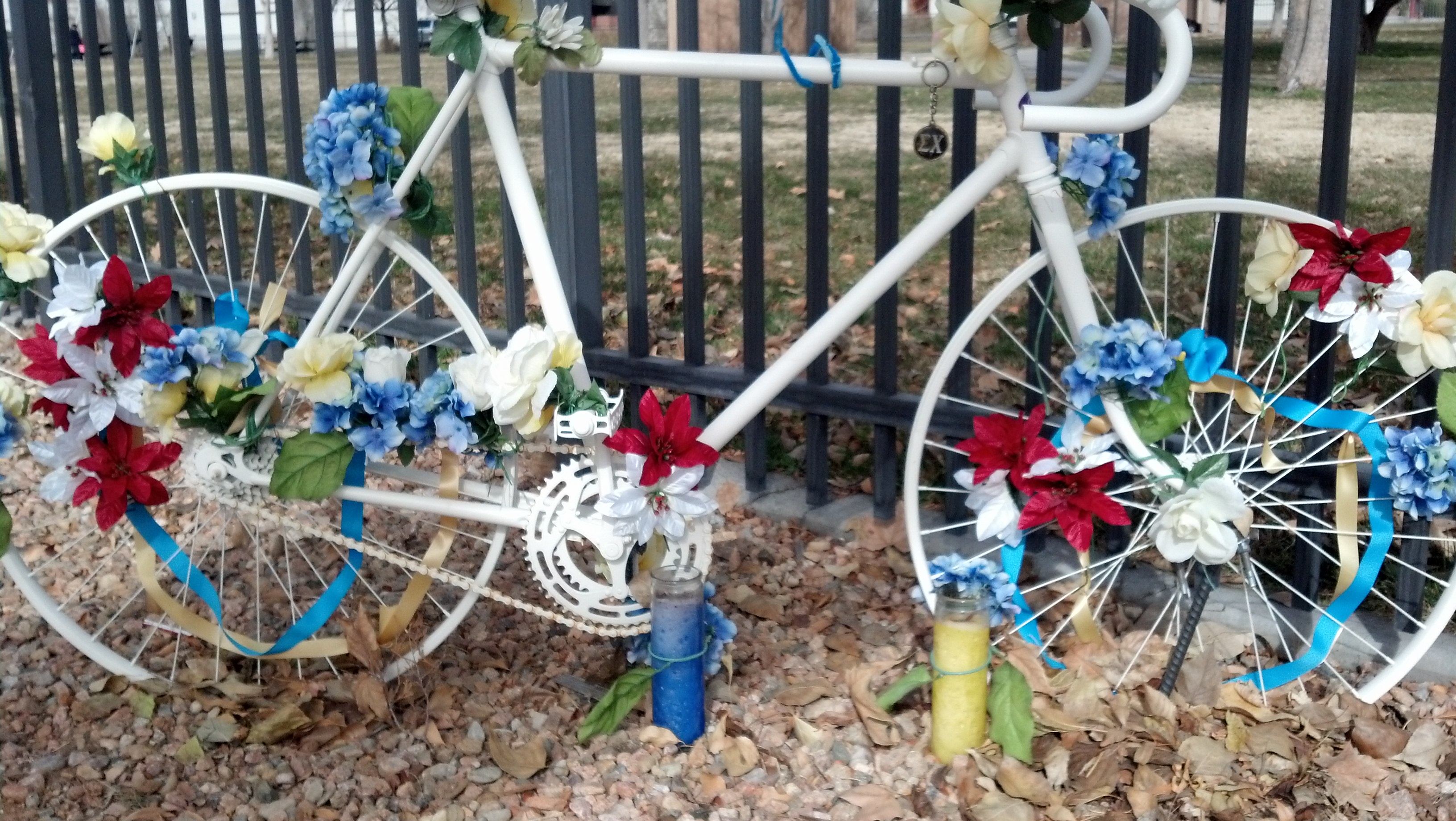 Some of my musings on traffic safety, or the lack thereof.