The purpose of this bill is to give New Mexico Courts sentencing options that better match the range of outcomes possible when someone has committed the act of careless driving.

Existing accountability options for people found guilty of careless driving include a fine, up to $300.00 dollars, and/or the possibility of probation or jail time, up to 90 days.  While this is adequate in careless driving cases that only cause property damage or minor injury, it is inadequate in cases where the outcome is great bodily harm or death.  With Senate Bill 290, the accountability options will be increased.  Guilty careless drivers who cause the death or great bodily harm of another road user could be asked to pay a fine, up to $1,000.00 dollars and/or serve probation or jail time up to 364 days.  Accountability options for cases with property damage or minor injury would not change.
Tuesday February 12, 2013, SB 290 was given a 6-0-1 “do pass” recommendation in Senate Public Affairs Committee.  Senate Judiciary also gave SB290 a Do Pass recommendation on Wednesday February 20!  Today the bill was on a long list of items to be voted on, but today’s session adjourned before that happened.

Write to your Senator TODAY

Urge your Senator to vote for the bill.

Ask them to lobby for the bill to be brought to a vote on the Senate floor ASAP!

The Senators talk to each other.  The more the issue is raised, the more likely they are to talk about it and vote in favor.  We need people to take action on this and let them know how important the bill is to us as cyclists and for traffic safety in general.  Remember your outrage when you hear about a careless driver killing a cyclist and then having to pay a $300 (or less) fine, etc.  Use that feeling of injustice as motivation to write an email.  If you live in the part of Valencia or Bernalillo county represented by Senator Michael Sanchez, you will note that he doesn’t have an email listed, only a phone number.  It is kind of a drag to inundate the secretary in his office with a bunch of phone calls voicing support of SB290, but there isn’t much else to do.  CALL!  I know that many letters are coming from The New Mexico Motorcycle Rights Organization members.  Add your cyclist voice to the mix today.

Below is a list of things that I feel this bill will accomplish, and things I don’t expect it to do.  Use any/all of this to help you write your email to your Senator.

Pass this information far and wide, to anyone you know who might support the bill and act.  Thanks for doing your part to help this bill pass.

a)      Reach some of New Mexico’s drivers as a reason to NOT drive carelessly,

b)      Raise awareness of the potential deadly consequences of careless driving,

c)      Reinforce the message that careless driving is not acceptable,

d)      Remind other drivers of the risks of careless driving & the benefits of attentive driving every time a careless driver is appropriately held accountable for the outcome of their actions;

When one reads the NM statute that defines careless driving it is such a good, common sense statement that should be in mind whenever we are on the road.

NM Stat § 66-8-114. Careless driving:
A. Any person operating a vehicle on the highway shall give his full time and entire attention to the operation of the vehicle.
B. Any person who operates a vehicle in a careless, inattentive or imprudent manner, without due regard for the width, grade, curves, corners, traffic, weather and road conditions and all other attendant circumstances is guilty of a misdemeanor.

We feel that by adding language that holds those found guilty of careless driving accountable in a way that is commensurate with the outcome of their actions, more New Mexico drivers will adopt behaviors that prevent them from being careless.

There are many other points you can use to express your support for this legislation.  These include:

Here is a Senator Sample Letter you are welcome to use, all or in part.

Whatever you say, end by thanking the Senator and urging them to support SB290.

Continue reading and following the links below to learn more about the impact of the current NM law on individual cases involving cyclists.

The 2012 efforts of support for identical legislation got a lot of press coverage.

The crash that claimed Heather Reu‘s life in 2009 was caused by a distracted driver.

It is heartbreaking that there is a 2012 story to add to this page with almost the same script.  Scott Duane Lane was killed January 10, 2012 by a driver so distracted she didn’t even know she had run a red light.  This case wrapped up October 26, 2012 when the No Contest plea that Carol Svinarich entered resulted in her being sentenced to 90 days of “house arrest”, paying a $300.00 dollar fine and almost $18,000 dollars in restitution to the family.

KOAT-TV and KOB-TV have covered the 2009 Reu case and the ongoing efforts to increase the penalty options when crashes like this happen.

KOAT-TV reports on two crashes in Albuquerque last week and this legislative initiative on January 14, 2012.

Also in 2012, we have seen two other instances where the death of a cyclist has been punished by the same sentence a “careless driver” in a fender-bender crash would face.  Bruce Wickensburg, the driver who killed Dan Montoya was sentenced to 90 days suspended license and a $300.00 dollar fine.  Miranda Pacheco, found guilty of “careless driving”  by a jury in the death of David Anderson was sentenced to 90 days in jail and paying the $300.00 dollar fine.

Basics about this legislation:

NMSA 66-8-114. Careless driving.
A.     Any person operating a vehicle on the highway shall give his full time and entire attention to the operation of the vehicle.

Bicycle tune-ups and safety equipment clinic for those who can’t afford to address these basic safety needs.

We can always use tubes and tires, chain lube, old parts or even old bicycles.  We have given out about 20 bicycles and 150 front and rear light sets.  Gorden Phillips (from TREK) must have fixed-up well over 100 bikes by now too!  If you want to help out, just let us know.  Extra hands are deeply appreciated!

Donations can be dropped off at Noon Day between 9:00 am and 12:00 pm 2/20/13
or at the Trek Superstore during normal business hours, any day of the week. 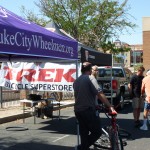 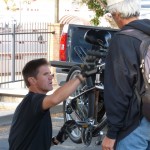 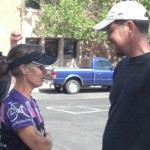 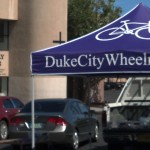 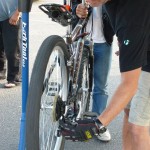 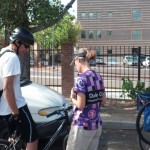