Members of the Greater Albuquerquer Bicycle Advisory Committee and Duke City Wheelmen have been speaking up with their concerns over the way that bike/ped facilities are being incorporated into this project.  Jennifer Buntz, Steve Mathias and Scott Hale were at the November 18 City Council meeting to share our concerns with the Councilors.  We spoke during the General Public Comment period, agenda item #9 which starts at about 51 minutes and our collective exchange with the Councilors lasts about 20 minutes.

Look for more details here soon.  This project may or may not result in a better situation for motor vehicles, but in its current form it will not be a good thing for cyclists.

A very interesting article in the New York Times from November 9, 2013.

Cyclists, I think you know Duke City Wheelmen as a group that wants only the safest conditions possible for bicycling.  With that in mind, consider the image below. 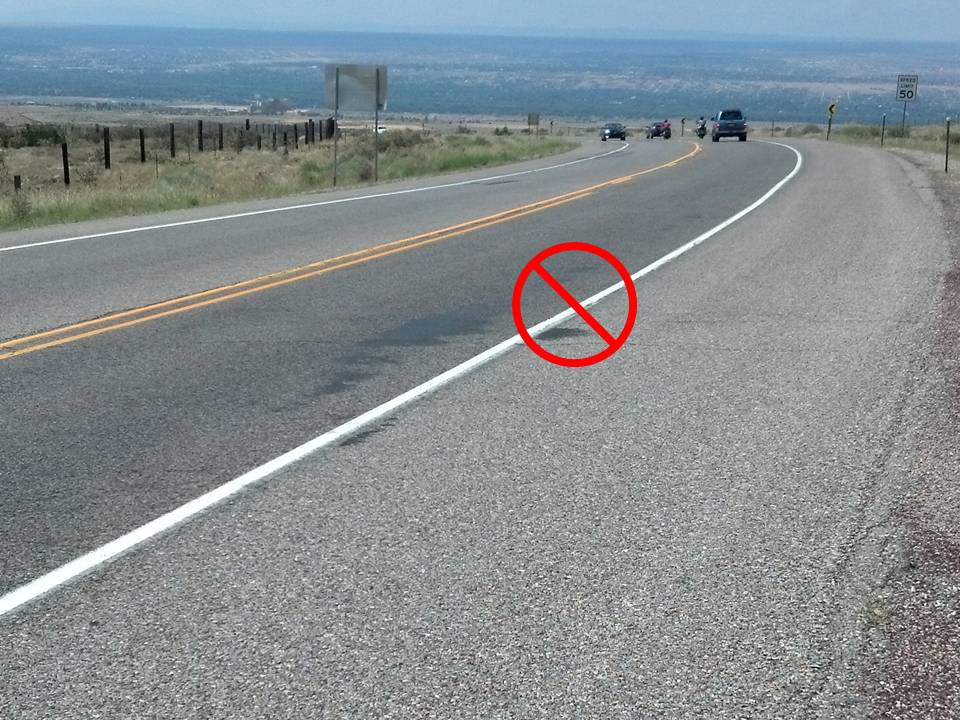 This is Tramway Boulevard NM Highway 556, on the westbound side.  There is a six (6) to eight (8) foot shoulder up and down all of Tramway.  And, as some of you know, NMDOT District 3 is repaving the entire shoulder of this east/west portion in an ongoing project (as of 10-27-2013).

With the goal of maximum safety in mind, PLEASE stop to consider your choice of where you ride on Tramway Boulevard.  If you are one of the many cyclists magnetically drawn to the white line, I’m asking you to reconsider that choice.

Instead, I would suggest putting the width of this shoulder to use for safety.
Your safety.

Here, on a road like this, we can choose to have a buffer – space between ourselves and passing motor vehicles.

I know, you are just riding along (JRA) and not really thinking too much about your position on the road.  You find your groove and it is as if you are magnetically drawn to the white line (even though you are riding a carbon bike).

What you aren’t thinking about is probably working against you.

I’m the first to defend a cyclists right to move left when there is an obstacle or the shoulder is too torn up to ride.  There are many situations where we need to move left (see below).

But when this isn’t the case,  THINK ABOUT WHAT YOU ARE DOING and move right.  It is better for you and it is better for us all – because it avoids irritating motor vehicle drivers when we don’t have to.

I’m all for being seen and for taking the lane when necessary.

Bicycles are
vehicular road users
according to City of Albuquerque and New Mexico traffic code.

When you stop and think about it though, riding right when safely possible doesn’t diminish our status as vehicles on the road at all.  It could be considered our way of making “Share The Road” a two way street (pun intended). 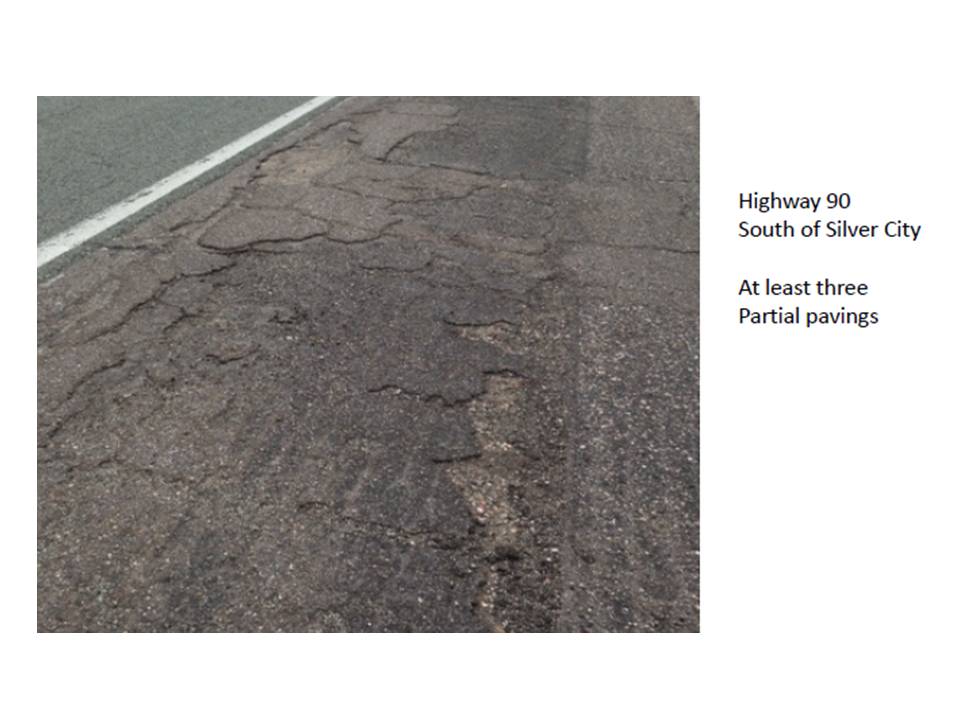 I send pictures like these to motorists who email me to complain about cyclists riding the white line, or moving left. 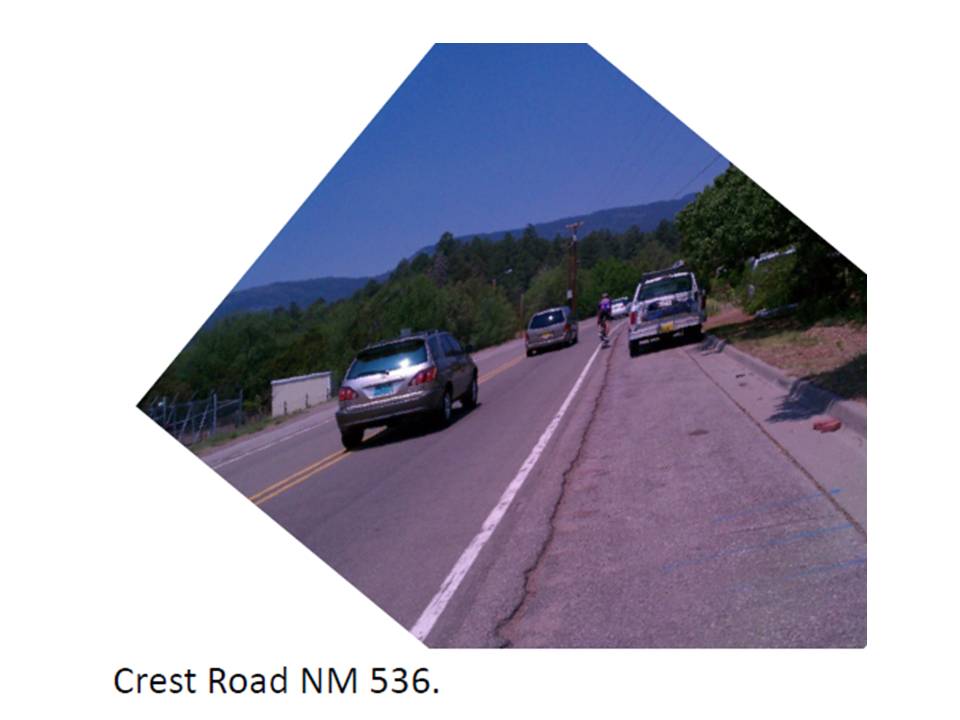 But on highways like Tramway, NM556, it is much harder to talk to motor vehicle drivers about what cyclists are doing.  I don’t have a defense for the behavior and I don’t really think there is a good defense on a road like Tram. 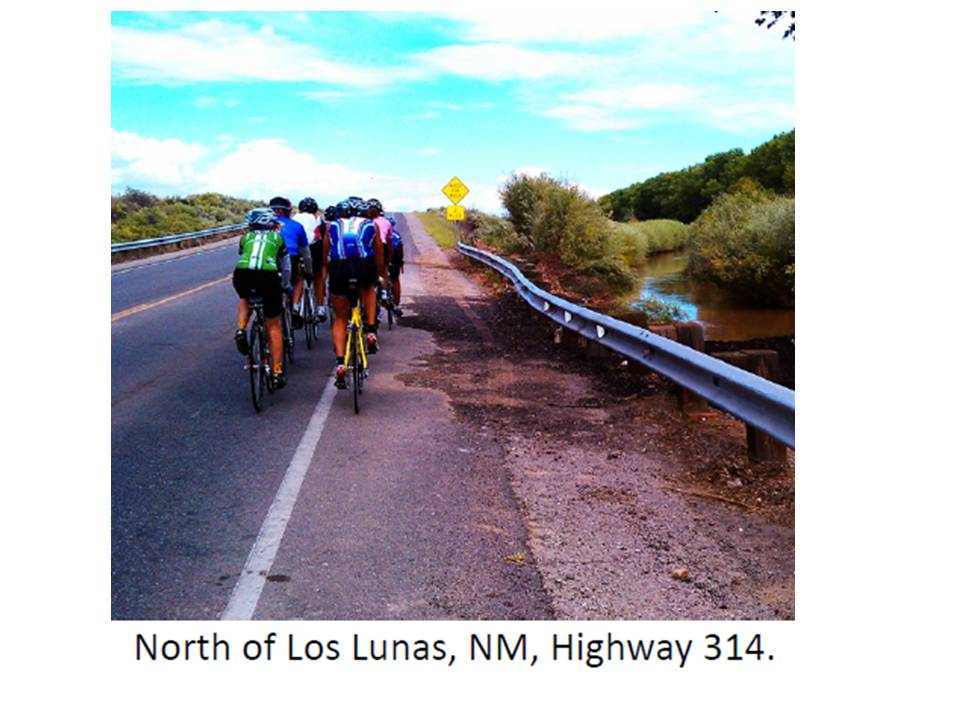 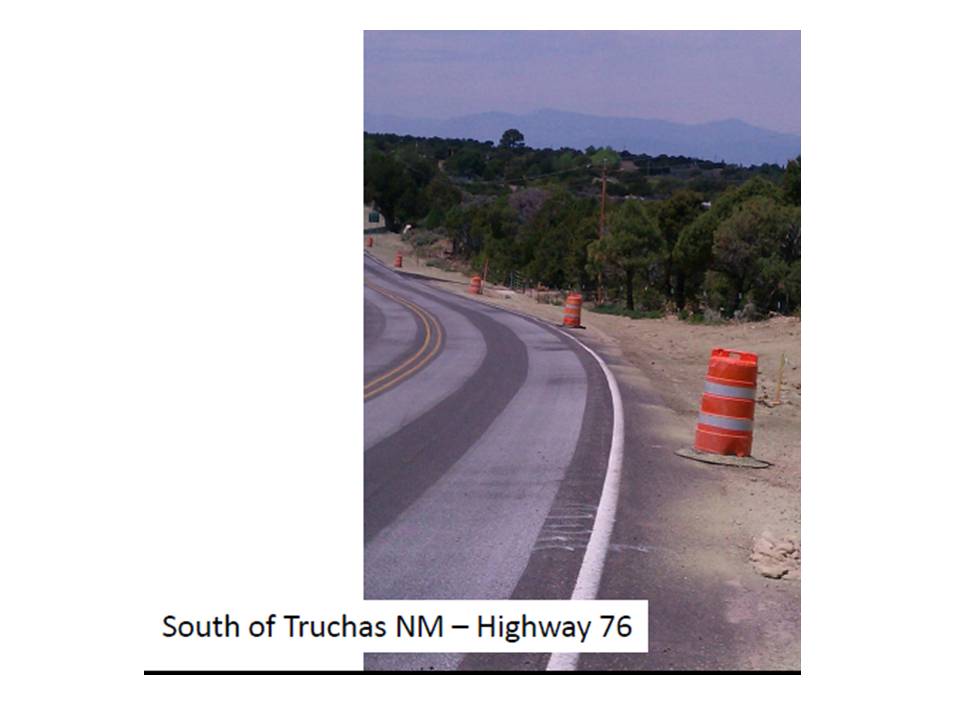 If you would like to add your voice to the call to NMDOT to provide safe shoulders on ALL New Mexico Highways, for cyclists, pedestrians and any driver who needs to pull off the road, contact the New Mexico Department of Transportation